Micah Bloom’s Codex is set in Minot, N.D. after a flood. After the cleanup, after the rebuilding, Bloom was struck by a particular subset of the remaining debris—books that had been strewn through the landscape by the receding waters. Codex is a meditation on these remains.

The film and the photographs document the final resting places of the books. They have become embedded in the environment—sunk into the ground, hanging from trees, slowly decomposing underwater. They are sites of decay that support buggy ecosystems. Usually protected indoors, their pages ripple and curve out under constant exposure to the elements. The film and the photographs document the state of this decay in gorgeous detail. But this is not the end of the story—it was, for Bloom, the provocation for the project. 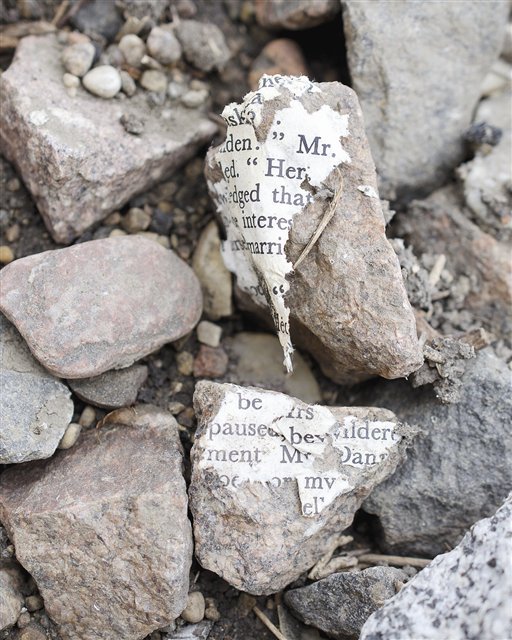 What is to be done with the books? They are beyond salvage, so Codex imagines an alternative to simply chucking them in the dumpster. The first explicitly human presence in the film is a hand clad in familiar hospital-blue sterile gloves, placing an identification number next to one of the specimens, photographing it and proceeding to carefully wrap it up for transportation to an off-site book morgue. The remainder of the film follows the books and their caretakers through the meticulous process of documenting, identifying and finally burying the remains as if they were human victims of a deadly event.

The film is moving. Its strengths are in long, ponderous shots of the decaying books. Its weakness is in a score too literally tied to the onscreen drama. But underneath the cinematography, the slow, quiet action and the poignant metaphors conjured by decaying human creations, the film obstinately makes an ontological claim—that a book is a special kind of object, that, like a human, it deserves a proper burial—and it is this position that I would like to address in this review.

I should qualify a bit, here: The film does not make a political case for a policy on book disposal, nor does it define a funeral form for codices. What it does is present an imagined world where books are treated with the same care and attention as humans. As with all such imagined worlds, the critical question is what bearing this imagined world has on the world we inhabit—what it shows us about our world and whether or not it distorts our world in a potentially damaging, and possibly seductive, way. 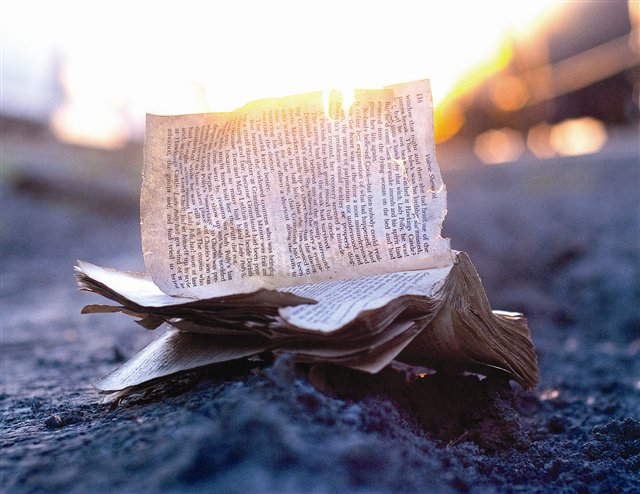 Codex latches onto the genuinely problematic ontological status of things like books—works of art that feel more significant than the common run of made things, but that we hesitate to accord the same dignity to which we do human persons. The film solves the problem by pushing books toward a more human ontological status. Watching the film, I can enter a reverie in which books are vessels for a spirit. I can imagine that works of art are living things and that the demands they place upon me can rightly rival those placed upon me by other people.

To a certain extent, this is true: I love books, and there are books that I love in ways that I love people. I delight in their being, and every time I confront the work I find some new trait or quirk that reveals something about them, or about the world, that is illuminating. And I take books seriously. I listen to what they say. I am willing to let them change me.

I spend a great deal of my time reading—I am sympathetic to a world in which books are sacred, where they stand apart from other things. But while there is no doubt something attractive about this cult of the book, I have not been able to shake the feeling that something is amiss. In this imagined world, it seems that books are being asked to be more than they actually are.

In the middle ages, it was common for people to gather worn-out sacramentals—scapulars, crucifixes, statues, icons, prayer-books, etc.—and burn them in a large bonfire on the eve of the feast of St. John the Baptist, a ritual that is still practiced in parts of Europe. This custom allows people to dispose of material items that have spiritual significance in a reverent and dignified way. Catholics are of course not the only ones to attend to such matters: Many religions have protocols for the burning or burial of spiritually significant artifacts.

On the one hand, Codex seems like a natural outgrowth of an ancient ritual and a fitting response to the evocative scene of books strewn about the landscape like so many corpses decaying in open view. Bury them or burn them: Show them the respect due to objects that in some way carry the mark of the human spirit.

On the other hand, because this exercise is made secular and cast in an antiseptic, clinical costume, the protections afforded by a communal, religious ritual are dispersed: It lacks the appropriate reserve and a larger liturgical framework within which to situate itself.

If the requiem for lost books becomes overwrought, it is because the books are treated with too much respect. Such an over-valuation can have the same effect as an under-valuation: It can obscure the book’s subtler and more complex existence. Ultimately, the film makes me uncomfortable because the ground it sits upon feels very slippery. Even standing on that slippery ground, though, Bloom has managed to create some stunningly beautiful, richly associative and powerfully moving (and still) images of lost books.