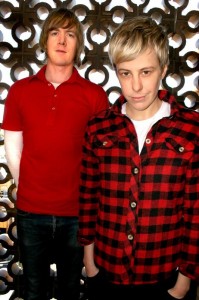 An Horse is the rock duo of Kate Cooper (singer/guitarist) and Damon Cox (drummer/singer), who began their partnership as co-workers at a Brisbane, Australia record store. That might be why their songs display such carefully craft and stay away from gimmickry. They come close to what Truman Capote described as the goal of his writing: achieving a perfect transparency. They follow the current vogue for guitar/drums duos, but do not mistake them for White Stripes; they have more in common with Golden Age Indie bands like Yo La Tengo and Unrest. The lyrics are personal to the point of being cryptic, but Cooper lets the listener in by singing in a voice that’s emotionally naked. The duo format means that there’s no place to hide, musically. Every snare hit and guitar pluck stands out and An Horse makes that an asset. They rock, no doubt, but they have a light touch, using dynamics and shifting rhythms to underline the emotion of each song.

They’ll be performing at the Blue Moose on Sunday March 11, with The Company We Keep, who are a bit more conventionally ‘alternative.’ But they sound pretty good, aspiring as they do to the wide screen bombast of bands like Arcade Fire. You can stream their song ‘Right/Wrong’ on Alternative Press’s web site here.