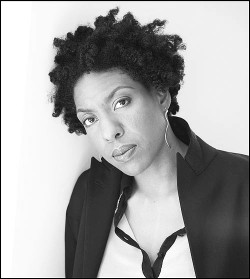 New York Times best selling author Ayana Mathis will be reading from her debut novel, The Twelve Tribes of Hattie (Knopf, 2012), at the Englert Theater on Feb. 25. The reading will be presented by Prairie Lights Books. Mathis is currently a visiting professor at the University of Iowa Writers’ Workshop, where she graduated with an MFA in Fiction. Her novel has received wide recognition, first as the winner of the 2012 Michener Copernicus Fellowship and then as the second book selection by Oprah’s Book Club 2.0. Critic Michiko Kakutani of the New York Times called the novel “astonishingly powerful,” and echoed Oprah’s comparison of Mathis’s work to that of Toni Morrison.

The novel is written in ten connected chapters, centering around Hattie Shepherd and her family. Hattie escapes the South during the Jim Crow period to seek a better life in Philadelphia. With her husband, August, she has two children who are lost to illness and poverty while still young. Although she goes on to bear nine more, the experience is deeply traumatic for Hattie and has disastrous consequences for her surviving children. Raised by an emotionally detached mother and an absent, philandering father, the basic needs of the kids are met but little more is offered to them. The novel is structured so that each character is examined, detailing the effects of the family’s troubled history on their lives. The stories build until the last chapter, when Hattie herself finally appears for a satisfying and emotionally complex resolution.