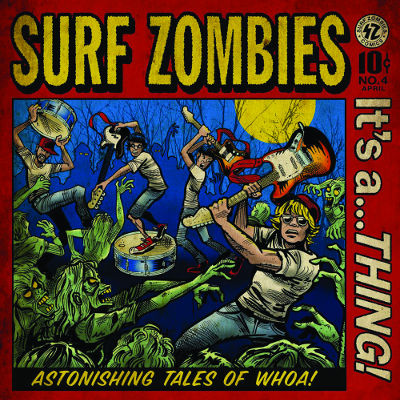 The Surf Zombies are back with their fourth album, It’s A… THING!, which marks the second album featuring their current band lineup: Founding member Brook Hoover is on guitar along with Ian Williams from the Wheelers and the Blendours, also on guitar. There is also Tyler Russell on drums and Trevor Treiber from the Blendours on bass, replacing Joel McDowell.

On the new album, a few of the song titles vaguely refer to surfing—“Martian Beach,” “Sewer Surfing” and “Locals Only” (a sign that’s posted around popular surf beaches). The rest of the songs focus on the tangentially-related subcultures of skateboarding, hot rods, science fiction, comic books and horror. But, aside from the tongue-in-cheek nature of the song titles, what we have is another solid slab of sinewy guitars evoking images of busting surfboards, wipeouts and pipelines on a distant glistening beach.

Since the band’s lineup still includes Williams who was very involved in mixing both this album and the band’s 2012 release Lust for Rust, it isn’t surprising that the two albums have a similar sound and attitude. The addition of the latest members of Surf Zombies have put welcome punk and psychedelic flourishes into the classic surf rock sound.

My favorite track on It’s A… THING! is the Hoover-penned “Tophat” which takes a Beach Boys-influenced guitar and bass line and mixes it with some over-the-top Jefferson Airplane psychedelic distortion. Hoover told me that the song is “supposed to be kinda trippy. Like background music for a low budget ‘60s biker film.”

The Surf Zombies may not come from a place where surfing is a pastime, but they have the passion, spirit and dedication of surfers in spades.