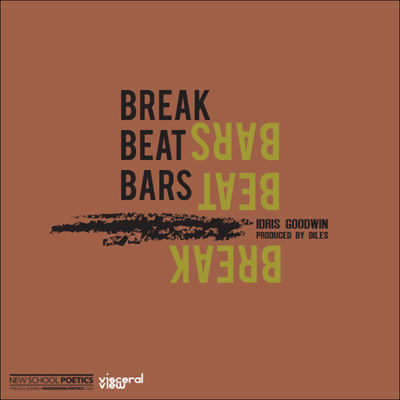 Hip hop was born as party music, constructed out of the raw materials available in the streets of the outer boroughs–funk & soul records and under-the-lamppost boasts. That it has persisted for 30-odd years is a testament to its contingency, constantly morphing to fit the now, spreading like a virus to every corner of the world. From Kathmandu to Compton, heads nod, kicks boom and a river of rhymes flows.

Back in the day Chuck D said that rap was CNN for black people, but these days it’s gone way beyond any single ethnicity and, more often than not, it’s more concerned with making bank than spreading the news about what’s going on. Which makes me glad there’s still people like Idris Goodwin fighting the good fight. On Break Beat Bars he’s introspective, exploring his memories of a suburban Detroit childhood and returning repeatedly to the creative process itself. “I know it ain’t green, I’m a paper killing machine, loose leaf to lineless three ring bindless, when I get stressed like the syllable in ‘syllable’ I explore the cuts and beats, it’s all cyclical.”

Made in collaboration with Albuquerque producer Diles, Break Beat Bars is constructed of loose-jointed beats and relaxed flows. Idris’ delivery is conversational, but the words are anything but off-hand. “I son fools like Sun Tzu with a tactical pen, I’m Sun Ra, drop jewels and electrical gems” begins “Willy Loman Bars” which uses name-dropping as an armature for reflections that whipsaw between the past and the present: “New Dance Show? Pick out my little Afro. It’s a long time ago now my hair don’t grow.”

Diles’ beats have a fine studio sheen, but drop a fraction of a beat every so often to remind you that they’re the product of human hands on the beat box. Idris flows right through the little Dilla-esque glitches–“Only way I stop rapping if I was jawless,” he says, and I’ll only stop listening if I go deaf.