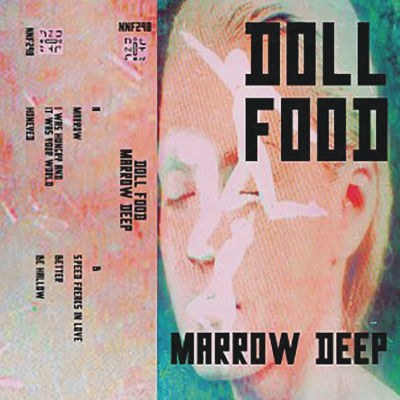 Doll Food, a former Iowa City improvisational noise duo (now based out of Chicago), has been crafting zonked-out and eerie soundscapes for about a year now. Brandon Volz and vocalist Bri LaPelusa’s composing process is deceptively simple: Each song begins with LaPelusa layering vocal loops into a Julianna Barwick-esque, one-woman chorus, followed by Volz creating a decaying soundscape with an array of pedals and synthesizers. The two then add warped samples from sources such as hypnosis tapes, weight loss videos and Catholic mass recordings to finish the songs. It’s a very narrow palette to be working with, but it’s clear that the duo’s greatest achievement on their debut release, Marrow Deep, is the amount of sonic territory they manage to cover within 35 minutes.

The bulk of the tape sticks to a mossy, corroded sound steeped in creepy weirdness. Each song finds its identity when different sonic elements stick their head out of the lo-fi muck. For instance, album opener, “Marrow,” hangs its nearly 7-minute length on a single vibrato synth tone that alternates between either burying or being buried by the rest of the song. Side B’s “Better” takes this approach to the limits and eschews the synths and samples found on the rest of the tape, instead building itself entirely out of LaPelusa’s vocal loops.

“Speed Freaks in Love,” the first track on Side B, is easily the best song on the tape and a perfect example of what Doll Food does well. Walking the tight rope between “harsh” and “hypnotic,” the track balances an id-like wall of distorted noise with a sweetly melancholic omnichord loop and a soulful baritone sax sample. For a relatively heady and difficult release, this is the perfect introductory track to Doll Food. It’s a Midwestern answer to Flying Lotus’ most bleary-eyed, 4 a.m. after-party tracks; the perfect make-out jam for the post-apocalyptic crowd or a torch song for, well, speed freaks.