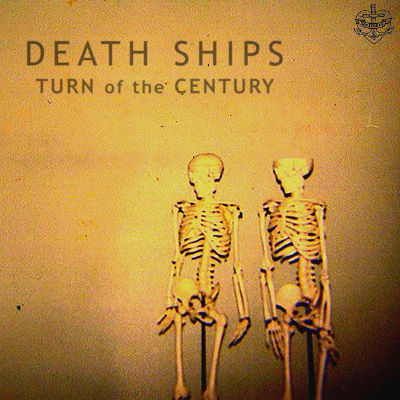 Turn of the Century EP
deathships.bandcamp.com

In interviews with R.E.M. around the time of their ‘92 album Automatic For The People, the band commented that it was difficult to write good uptempo songs. In fact, they originally wrote some “rockers” (their words) for the album but ditched most of them in favor of slower songs like “Everybody Hurts” and “Nightswimming.”

That interview really stuck with me as a kind of truism about songwriting: It’s hard to write good uptempo rock songs. That said, when I look at the slowly growing catalog of songs from former Iowa City power pop rocker Dan Maloney, he has no lack of great “rockers.”

Dan Maloney started Death Ships back when he lived in Iowa City. His debut album Seeds of Devastation came out in 2005 and was regarded as a pretty damn good slice of guitar pop. Life happened, he moved to Chicago and put five years between the debut and 2010’s Maybe Arkansas EP before releasing Circumstantial Chemistry in 2011.

Dan has seemingly found his songwriting stride after that period of inactivity, and we are lucky to have his new EP, Turn of the Century. The album kicks off with some great power chords on “New Belief” and doesn’t slow down until it takes a bit of a breather in the second-to-last song, “Union Shirt.” It wraps up with a storm of guitar distortion and marimbas in the title track, recalling the music of Twin Cities legends Hüsker Dü.

The centerpiece of the album is “Shit Eating Grin,” a six-minute tribute to bittersweet love. The song exemplifies Maloney’s self-deprecating songwriting: “I go too far, too soon, after all, I’m the one with the shit-eating grin.”

Turn of the Century is a continuation of the sound Maloney established while living in Iowa City and has been working on since. No dramatic re-engineering of his sound or style on this release, but he keeps writing my favorite “rockers.”