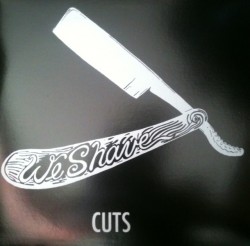 We Shave make pretty pop for music nerds. Their latest EP, Cuts, was recorded in a time-space rift where blue-eyed soul, garage rock, kraut rock and hints of no-wave get along like old friends at the bar. But the real secret to We Shave isn’t the genre splicing. The magic of the duo is the effortless and simple pairing of Bendan Spengler’s mesmerizing organ vamps and the commanding vocals of Lindsay Chastain. It’s a simple equation that adds up to the most successful cuts on Cuts.

Opening track “The Bridge” launches with a triumphant organ blast that should intro a crooked preacher in a traveling religious revival before pushing into a pulsating organ line for Chastain’s detached croon. The waltz is a dirge for the death of the cold and isolating city and a call to “hit the country instead.” It’s the first of many bleak portraits of modern life that plead for a less materialistic and a more hands-on way of life.

We Shave follows up the haunting mantra at the end of “The Bridge” with the playful mysticism of “HooDoo.” Spengler’s organ is bright and chirpy as Chastain doles out sweet syrupy lines filled with vague imagery about men who take your heart and brains and store them in jars. “HooDoo” gets an electrifying assist from a jolt of fuzzed-out guitar in the chorus; it’s one of a handful of additions to the duo’s sound that packs a big punch in a small dose and gives Chastain’s coos some extra life.

But We Shave does just fine by themselves with a drum machine handling percussion duties. One of the most successful tracks on the album, “Burning Hand,” is built around baroque-pop motif laid down by Spengler, backed by toy-drum thump and carried by the double-tracked drone of Chastain’s velvety voice.