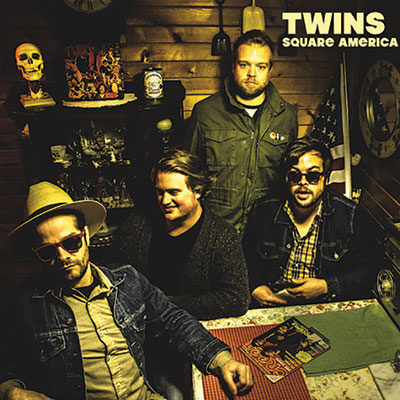 Iowa’s very own princes of guitar pop are back with another slab of black vinyl densely grooved with their trademark harmonies and chugging guitars.

Their 2014 album Tomboys on Parade was a smart collection of guitar pop that I described in my Little Village review as being a “survey of power pop,” as it had songs ranging in influence from BritPop and British Invasion to American pop rock.

This time around TWINS entered the studio with a more singular idea of sound. In a conversation with guitarist and vocalist Joel Sires, he said, “I think power pop kind of took a backseat on this record. It’s just more of an American Rock ‘n’ Roll sound — à la The Replacements.”

While I’m still hearing a little Oranges & Lemons-era XTC on this summer’s Square America — in the bubbling percussive guitars and harmonies of “Take That Gurl” and the bright chiming guitars in “Mary’s Sister Margaret”—TWINS have handed in their power pop membership card for an honest-to-goodness guitar rock album. I don’t hear the drunken slop of The ‘Mats, but certainly lots more KISS and Cheap Trick riffage all over the place — more in line with their driving live sound.

On Square America, TWINS are refining their sound — a result of the band maturing. Beyond that, this is the bratty bar band that still can’t help but dabble in the themes of young, hormone-addled lust — the thrill of the chase, the bummer kiss offs, the wistful attractions. Blasting power chords, sex and an eternal summer break, delivered by a band at the peak of their rock and roll powers. Stand and be counted among the devoted: TWINS are back!

This article was originally published in Little Village issue 201.