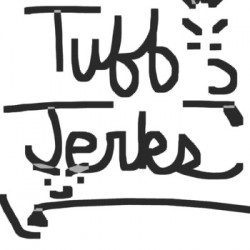 Listening to the new record from Tuff Jerks makes me really want a Miller High Life. While I fully respect the sawdust tang of Pabst Blue Ribbon, it fails to fill me me with the same schmaltz Miller High Life does. I view High Life as the ideal beer for dancing in a dank sweaty basement or singing songs in a creek bed.

For its fun, occasional irreverence and sheer quality, Tuff Jerks new record reminds me of that beer. Jason Hennesy and his cadre of Iowa City awesomes have put together a record of loose but well-developed rock songs that are built on a foundation of songwriting that is buoyant and catchy. While some of Tuff Jerks songs don’t take themselves that seriously, they always manage to avoid smirking immaturity.

The record’s sparse rock instrumentation is filled out with occasional string flourishes and sunny backing vocals, while Jason’s warbly and occasionally effete voice has enough range to successfully pull off both goofy and sincere. I have a lot of respect for a someone who can pull off a song like “Malt Liquor and Cheese” and then turn around and present a song as honest and sweet as “Learned My Place.”

As far as mixing, the drums and bass on this record largely take a backseat to the straightforward guitar parts and vocals, which gives the album an intimate garage vibe and adds to the backyard barbecue feeling of the album.

While it may be silly to say that Tuff Jerks’ records reminds me of drinking a specific beer, I mean it as the highest compliment. One of the ways music can succeed when it maintains a cohesive aesthetic is by tying itself directly to the sensory memory of the listener. Fantastic music can do this on the first listen. So, until you have your next High Life, this album should be able to tide you over.

Lucas Williams was born and raised in Iowa City but now works as an environmentalist in Chicago. He likes bicycling and beer.