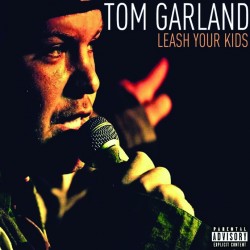 Tom Garland is no stranger to the Iowa City comedic scene. Emcee of the Yacht Club’s weekly comedy night, One Night Stand, the stand-up performer and touring comic has fully embraced and helped expand on what Iowa City has to offer up-and-coming comics.

Garland has opened for such acts as Joel McHale, Alonzo Bodden and Steve-O, and now has released a full-length album for digital sale on iTunes, Amazon, Rhapsody and more.

On the basis of Leash Your Kids, it would seem that Garland’s biggest comedic influences are Dave Atell and Jim Gaffigan, blending observational humor with more in-your-face themes.

The 16-track, 56-minute album was recorded in March at the Yacht Club with the assistance of local comic Don Tjernagel, in one take, with no edits or laugh tracks.

“We wanted to bring the listener in as close to the intimate Iowa-Comedy-scene feel as possible,” Garland said.

With subject matter ranging from rewriting the Bible to hot button headlines like Jerry Sandusky, Garland fearlessly forges through his routine despite the mixed audience reactions caught on the recording.

The real meat of Leash Your Kids is found in the graphic personal stories Garland shares with punchlines often taken at his own expense. The stories take the album to a deeply personal place where Garland exposes his own flaws as a boyfriend and human being.

Erin Tiesman is a web writer and freelance journalist living and laughing her rear end off in the heart of Eastern Iowa.