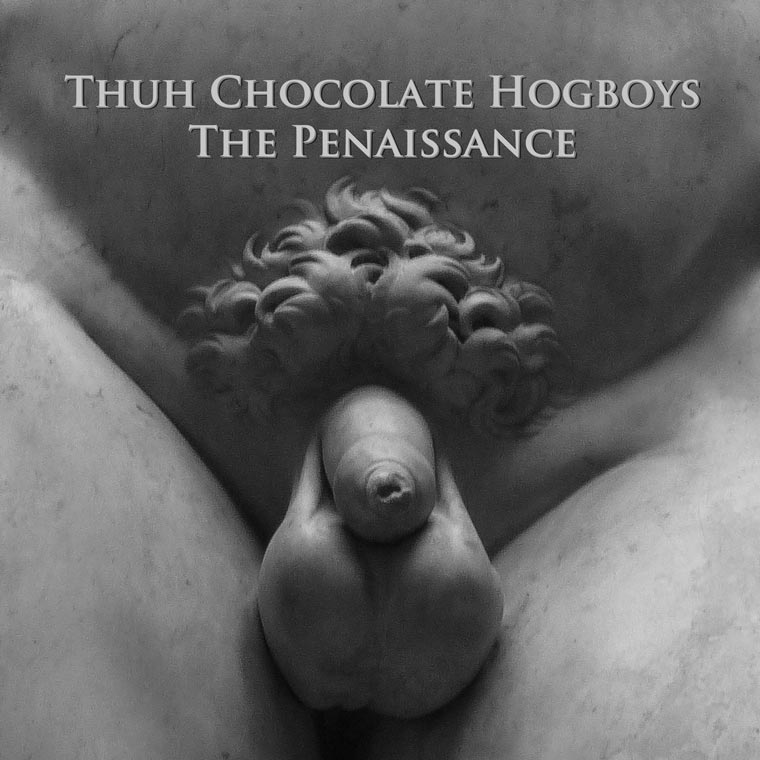 Iowa City’s rotating ensemble of veiled space cadets, Thuh Chocolate Hogboys, have given to the world their 30-track, eight-hour freak-of-nature The Penaissance (phallic, indeed), due to drop as a 12-sided cassette on a mysterious day in June. Bad Hogboy and Fluffy Kitten Chubby Hogboy were the primary engines behind the record, with contributions from the likes of Spirit Cakes Hogboy, It’s Hogboy, Wee Wee Pee Pee Hogboy, Bleauhardt Hogboy, Ded Claun Hogboy, Normal Hogboy, Vuhnilia Hoggirl and Awe Mane Hogboy.

The tracks within this release are compiled from recordings made sometime during the humidity-addled days of summer, throughout the fall and into winter this past year. The songs stretch anywhere from shuffle beats to polka to psuedo-Flamenco to electronica to Americana to free jazz — bass and guitars brushing against each other, drums laying off the beat, organs howling overhead, miscellany of electronic and acoustic musical accessories. As the lockjaw reaches its pressure point, The Hogboys release into groovy carburetor catharsis. The song titles, re-scrambled digraphs and graphemes, produce phrases that float somewhere between this world and another.

I spent the better part of a gloomy, nippy day in May transmuted to Hogboy la-la land. The Penaissance is a purely instrumental venture, with great distance between its mile-markers, meant for pathological introspection. This selection of “journal” entries from my uninterrupted listening most accurately renders my reflections on the textures of The Penaissance. I dub this: Compos Mentis of the Infinitely Dense, scored by Thuh Chocolate Hogboys.

0h 52m — “Janayuzz Crighzd” It’s as though every every page is touched upon here from the Encyclopedia Brittanica on Jam Bands. The explorations of chord structures, density and instrument choice (electric guitar, saxophone, glockenspiel, etc., etc.) generate different emotional valences to each tune. This is “Grade A” jamming.

2h 41m — “Pawzchurrig Scwirl” There is a lot of girth to this bluesy track, especially in the dirgeful-sounding bass guitar tone. In the midst of this murky bayou jam it’s easy to forget that this is music from 2017, not John Fogerty’s 1970 — I’m all in on this one.

I can’t tell which acts more like an interdimensional warp device: this track or the half-hour brain-blitz prior. A relief, nevertheless.

3h 40m — “Jendruh Duhfien’t” I’m sure the persistent overcast is further acting like a mirage, but I can’t quite recall any exact “song” I was supposedly listening to a couple hours ago.

5h 04m — “Hoofucdt G’odd” The principles — and formulas — of some of the greatest live jams by the Grateful Dead (Europe ‘72, Cornell ‘77, even Anthem of the Sun) are present here. The Hogboys have scrupulous attention to the ebbs and flow of improvisation, breaking form into disintegrating, dislocated sounds — the delirium and gurglings only daylong jams in a basement can provide. This is music for people who find the Yacht Club doesn’t provide enough experiential music.

5h 27m — “Me and My Mithtweth Got Methed With” Aw shucks, The Hogboys shore do got a soft side.

6h 20m — ”Goewhaycuhppuredaad” The Penaissance is like a sensory deprivation chamber. I’ve lost my sense of where my day is and where it’s heading — and there’s still over an hour to go. Would I ever do this again? Probably not. And I can’t imagine more than a handful of individuals accomplishing this.

7h 13m — “Jimismamulch” I’ve come into the penultimate track. Dedicating oneself to listening to an album of such length and with this much determination is exacting, unhealthy. To focus solely on jam fusion space rock with no vocals is nearly impossible. Walking around I must look like my eyes are transfixed on something two minutes in the future.

Perhaps this is telling. Do we not commit ourselves to the ritual of the eight-hour workday? If I’m feeling so estranged from this venture, shouldn’t I feel this estranged from a “normal” day of work? Isn’t the world defined by the singularity of its absurdity?

This article was originally published in Little Village issue 222.