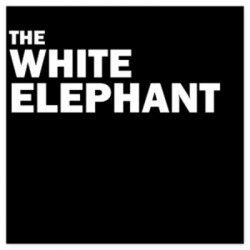 The White Elephant
Self Titled
thewhiteelephantband.com
Brothers Ron and Tim Coleman and Chris Rohr of The White Elephant grew up in Wapello, IA (pop 2,067) in the Southeast corner of Iowa. Where many from similar small towns in the Midwest might choose other less productive extra-curricular activities, these guys chose to form a band in 2010.

Since they are far from any significant metropolitan population, they have had to resort to extensive promotion and travel to spread awareness of their particular blend of bluesy garage rock. I heard The White Elephant on Iowa Public Radio this summer as a finalist for the opportunity to play the 80/35 Festival Wellmark Mainstage. While they didn’t win, they did win a coveted regular rotation on the station’s tastemaking show, Night Music.

The album was recorded by Iowa studio legend Tom Tatman (Stone Sour, House of Large Sizes, among many others) at Catamount in Cedar Falls. Tatman managed captured the band’s dynamic and loose live sound to great effect. Overall, the self-titled release has a sound not unlike Fat Possum bands like The Black Keys and Junior Kimbrough, or any of Jack White’s bands.

Standout tracks for me are the stompin’ four-on-the-floor album opener, “Sinner,” with its dirty wah-wah solo and the slow suggestive note-bends in the junk-grinding “Last Night Stand.” Another track that I like is the moody, atmospheric “Devil Dreaming,” which comes off more like The Cult or The Screaming Trees than the other songs.

The White Elephant has played Iowa City a couple of times recently and I would recommend checking them out next time they’re in town.