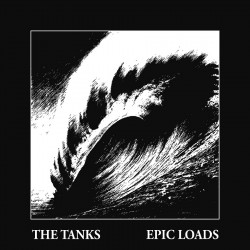 The Tanks third long-player, Epic Loads, finds the noise-rock trio settling into a groove with a new drummer, Joe Ross, and refining the more assured approach of their previous album,

The heart of Epic Loads’ lineup may be the strongest set of songs the trio’s ever committed to wax. It all starts with the sprawling “Black Vise,” which closes out the A-side, a big fist-pounding number. The first half is a linebacker barreling down on you at full speed. The chorus is full of shouts and pell mell snares, but after the three-minute mark symptoms of the concussion start creeping in: the tempo slows to a plod, Kevin Koppes’ chanting starts getting hazier, slipping further back in the mix as the song continues, and a fog of feedback and distortion settles in as the track fades out and the needle nears the center of the record.

The B-side opens with the glitchy electronic noodling of “Stop Taking Pictures.” Both “Black Vise” and “Stop Taking Pictures” show The Tanks embracing the studio, taking advantage of overdubbing and playing soundscapes a bit more and both tracks are stronger and more engaging for it. The lulls at the beginning and before the chorus in “Stop Taking Pictures” have a heightened tension because of the eerie noises underneath the overdubbed bass parts.

The third cut in this murder’s row of world-beaters is “Seductive in Camo.” The album’s seventh track might be The Tanks’ strongest straight-ahead rocker ever. The echo effect on Adam Luksetich’s bass actually serves the song’s full sprint speed, and also harkens back to classic slasher flick scores (think Halloween, Friday the 13th, etc). After all the barking and synth stabs, the trio slows the whole thing down for some good old call and response howls.

The three-song stretch has some of the biggest and most dramatic dynamic shifts of the band’s career, they’re worth the price of the limited-run vinyl; the other seven cuts are pure gravy.

John Schlotfelt is looking for a someone fluent in binary to help him in peace negotiations with the CPU’s of the world.