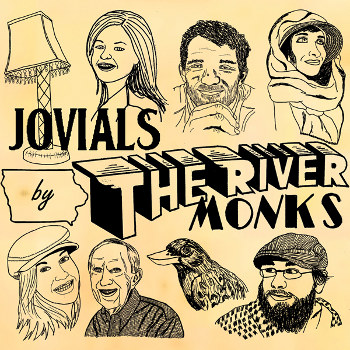 The River Monks take their name from a literal translation of “Des Moines,” their home town. At first, their music seems as straightforward as their name but, as I kept listening, nothing about it stayed simple.

The River Monks are a trio with Ryan Stier as the primary songwriter for the group. The group is a folk-pop project and it has the hallmarks of one; there is quiet lyricism, the evocation of nature and gentle emotions. The album is full of beautiful, detailed acoustic instruments captured by transparent, clean production. Each sound sits very distinctly in the mix, which highlights the instrumental and vocal interplay. The band makes great use of vocal harmonies throughout the album. Each one of these things is excellent on its own, so I couldn’t figure out what was troubling me about Jovials.

I figured out my confusion when I listened to Grizzly Bear’s Yellow House again. I think that Grizzly Bear’s sound is far heavier than the River Monks’ gentle folk-pop sound, but there is some similarity in terms of.production values and use of effects. Grizzly Bear recorded Yellow House in founder and lead man Ed Droste’s mother’s house on Cape Cod. Likewise, The River Monks recorded their album at member Nick Frampton’s house in Creston, IA and at Frampton’s parents house in Clive, IA. Both the resulting albums are striking for the intimacy that they convey.

I felt like I was a part of the album, sitting in the house and watching them sing these songs, but the album was difficult for me because that feeling of intimacy is one that I haven’t gotten from an album in a while, perhaps one that is becoming harder and harder to come by.

As Grizzly Bear does on Yellow House, The River Monks put you in the middle of their songs, increasing their emotional impact and highlighting their simple strength and intense musical complexity. Their well-constructed songs require the closeness of a home studio. This can be heard on songs like “Winter’s Backdrop” that sound like they are being played specially for a single listener. This intimacy and the band’s musicianship make Jovials a rather compelling debut.