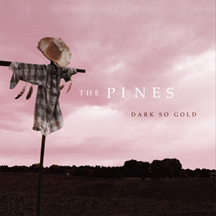 I’ve been a dedicated follower of former-Iowa City band The Pines since their first album came out on Dave Zollo’s late record label, Trailer Records, in 2004. Benson Ramsey and David Huckfelt have since recorded three albums for Red House Records—a label with a famous affinity for the Iowa City folk and blues scene. Each of The Pines’ albums has been a chapter documenting the band’s growth as musicians and songwriters. They’ve moved from a band clearly influenced by growing up around the Iowa City old guard to a sound which is distinctly their own.

For The Pines latest release, Dark So Gold, they’ve broken out the box of the same paints and brushes as before and laid to canvas landscapes made of soft-focused, almost half-remembered dreams. To the observer, only the smallest details of the picture are revealed—a conversation perhaps, a late-night glance to the sky, a heartfelt emotion lingering. As we reach for meaning we fill in little bits of ourselves.

Introducing an early performance of “Cry Cry Crow” in Dubuque last spring, Ramsey said, “A lot of our songs are getting quieter as we get older.” In many ways, The Pines are the latest in a run of musicians that owe a debt to the laid-back and mellow blues template laid forth by JJ Cale. That said, the album is a sonic delight. This time around, the band has utilized more studio production magic adding atmospheric washes of sound—especially those brought by the keyboard work of Ramsey’s brother, Alex—at which their previous albums only hinted. The slight use of a spinning Leslie speaker on Benson’s voice helps lend some otherworldly creepiness on “Be There In Bells.” But the slide-guitar lick on the same song has a hook that keeps me coming back.

The title of the album, which comes from the song “Dead Feathers,” seems to be a pun, or maybe a mondegreen of some sort, but it’s clear that somewhere in the darkness The Pines have certainly found gold.