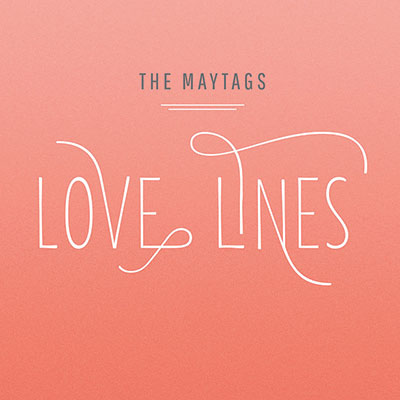 Seven-piece Des Moines band The Maytags continues their rise to the top of the modern soul scene with their full-length debut, Love Lines, out July 1. Frontman Dustin Smith told me in February that, when recording all in analog (as this album was done) there’s “no excuse not to have your shit together.” The results of this mentality are as evident on Love Lines as they were on their EP Nova last year. This band is slick and tight, locked together by invaluable drumming, and led with laser focus by vocals that honor what’s gone before even while blowing right past it. From the first bars of the opening track, the listener feels transported — this is without doubt a classic soul album — but the heat of a more modern influence makes its presence known, most prominently on the three song set, Suite for Green Eyes (“Abused,” “Love Lines” and “Street Clothes”). Here, you can hear echoes of the funk-influenced G. Love and Special Sauce, and even some hints of the tricks that Beck was playing on the genre in the late ’90s.

On each listen, a different song becomes a favorite track. The obvious single, “Marry Ya,” slid in at the standard slot at track 3, is the immediate attention grabber, with its showcase melodic horn lines. The ’60s-influenced, Temptations-esque “Call Me,” however, is a slower burn. Hidden away at track 7, it sneaks up on you, rolling in subtly after the showier “Street Clothes.” The vocals, and especially the lyrics, have a stronger sense of place on this tune than on some of the others, but it’s also one of the more layered tracks on the whole; finding a new line buried on a subsequent listen is like striking gold every time.

The entire album benefits from multiple listenings. Throw it on repeat — it’s solid and flexible enough to serve as a backdrop to any activity (although fair warning: You might accidentally start dancing at your desk). But be sure to listen to it at least a few times through at full volume, with full attention. Some of its best features, like the fantastic backing vocals, can get lost if you don’t let it take over the room. Love Lines is a debut that is full of promises — and I can’t wait to see how the Maytags fulfill them.

This article was originally published in Little Village issue 202.