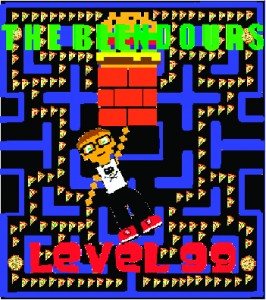 The continuing influence of The Ramones’ music on the face of rock years after their breakup is a testament to the idea that simple and direct is the most effective approach to getting to the hearts of youth. Directly or indirectly, any variation of punk rock today owes a debt to the amphetamine-driven sped-up version of ‘60s rock that The Ramones made.

The Blendours—comprised of members from Coralville and Cedar Rapids—take The Ramones’ formula of fast pop punk, only replacing the occasional themes of brutality and glue sniffing with video games and Anime. On Level 99, we are again treated to the avalanche of acoustic guitar chords and doo-wop harmonies established with the band’s 2011 debut album It Came From the Radio. I hesitate to call it a concept album, but a few of the songs concern themselves with video gaming, including “Level 99” and “Love Only Costs A Quarter.” “Ian’s Burger Boss” is possibly the only song ever written about the wonders of having a video arcade emulator in a classic arcade cabinet—“It’s time to play, it’s time to play. Forget about costs. It’s time to play, it’s time to play. There’s no pressing pause. Ian’s Burger Boss.”

The Blendours don’t take themselves too seriously and I often find myself grinning with the fun turns of phrase and sunny harmonies. On their Facebook page The Blendours recommend twice-daily dosages of their music. Seeing as Level 99 clocks in at just over 31 minutes (and none of the 19 tracks are over three minutes in length) this is an easy pop-punk pill to swallow. 2013 finds the band turning electric, augmenting the core duo of the band—Trevor Treiber and Bre Senior—with Ian Williams on drums and Abby Haley on bass. This lineup will be releasing a split LP with Canadian pop punkers Old Wives this spring. Until then, join me in the challenge of reaching Level 99.