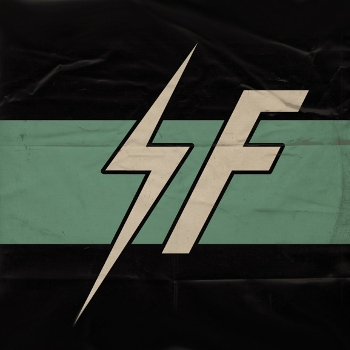 Music has done a number on Luke Tweedy.

He was a record store guy with a uniquely acerbic bedside manner. He taught himself electronics and audio engineering and built his recording studio, Flat Black, from scratch. He’s documented (in first-rate commercial recordings) adventurous music from Iowa and beyond. He founded the infamous ft(The Shadow Government), whose punk anti-music weirdness was a hallmark of the 2000s Iowa City experimental music scene. He founded the Grey Area Music Festival, which takes place on the grounds of Flat Black Studios.

So what does Tweedy do when he gets a day off? Most recently, he teamed up with Brendan Spengler and Ed Bornstein for the Sinner Frenz project. Together, they assemble songs out of modular synthesizer sounds, guitar pedals and drum machines. Bornstein (Foul Tip, Be Kind To Your Mother) provides percussion. There are also vocals from Tweedy and Jenny Hoyston of Erase Errata. Tweedy adds sounds from his idiosyncratic noise gizmos, effects and studio magic. It is raw electronic music with occasional distorted vocals.

Separation from Church and State (out April 20) is a studio production, but each song begins as a live performance on modular synthesizer. Spengler adds occasional live keyboards. It’s a cliche to call music unique, but I don’t know anyone else making this particular thing — equal parts outsider industrial music like Coil and bleak, mechanistic punk rock like Suicide.

“Sin Comin On” is a key track. It’s wrapped on an armature of a heavy, distorted drum loop and filthy, distorted bass. Over this, Tweedy yells/sings “I can feel a sin coming on.” The embrace of distortion and noise is so finely worked it’s paradoxically almost elegant.

Techno influences the repetitive beats, but techno is usually aimed and producing dance floor ecstasy. This is dark, mechanical music, driven by the relentless clock of the modular synth. In the context of Iowa, it has a different vibe. You can hear the wind over the flat land of rural Iowa, stirring up and making something new from musical concepts first imagined in Berlin, London and downtown New York.

The fat synth lead in “Disconnect” recalls Gary Numan’s “Cars”; the vocals seem to float into the song like pirate shortwave radio signals. Brendan Spengler’s love of techno pop is evident in his previous work, but “Disconnect” is a purer expression of that love, a perfect machine of a song, as shiny as it is bleak. It echoes the no nonsense electro of Neil Young’s Trans and the more dystopian side of Devo.

The chief animating force for Sinner Frenz is the raw experimentation with minimal gear that goes on in dank Iowa basements. They seek a dark lushness, where every sound’s sensual texture stands on its own. Flat Black Studios is full of vintage microphones and boutique audio processors, but they remember what it’s like to struggle with a broken Casio to make something true and vital. It’s music made with an extreme economy of extravagant means.

Separation from Church and State goes all in on its punk electronic aesthetic, which means that it may not be for everyone. But for those who like Kraftwerk as much as stoner metal, who connect viscerally with the raw beauty of square waves and overdriven filters, this record will do the job.

This article was originally published in Little Village’s April 2022 issue.