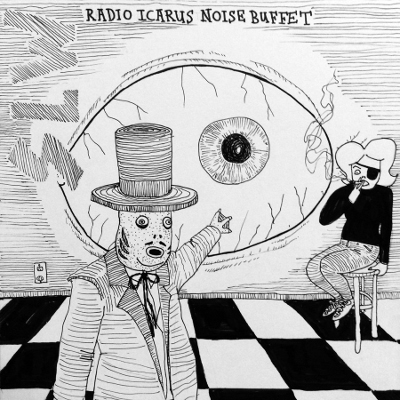 We’re now over 50 albums deep into the career of Iowa City’s home-studio legend Samuel Locke Ward. He is, as they say, prolific. But the scale of his output wouldn’t be much more than a gimmick if not for the fact that he has maintained an almost unbroken string of high quality across his entire massive catalog. We don’t just look forward to the next SLW record because we’re curious to see if he can still pop ‘em out. We look forward to it because he’s consistently delivered outstanding albums packed with deft lyrics and distinctive vocal performances. And now he’s gone and done it again.

You can damn near set your watch to it. Sticking to the impossible release schedule we’ve come to take for granted, another excellent new collection was added to his Bandcamp page last month: a twisted rock and roll set called Radio Icarus Noise Buffet, with self-drawn cover art reminiscent of his recent comic books Beasts of Heaven and Flak. (Locke Ward is also a cartoonist for this magazine.)

SLW records have traversed almost the full gamut of possible rock and pop genres. But whether he’s playing country or metal or garage or noise you can identify SLW in a split second: The biggest tell is his voice. An ambivalent, satirical mood is embedded in his singing, whether he’s in falsetto or baritone, screaming or whispering. This capacity for tragi-comic vocal characterization is the key to his brilliance and the connecting thread of psychedelia through his career.

Sure enough, Radio Icarus Noise Buffet has all the markings of classic SLW. “Shitstarter” is set to a frenetic drum machine that Sam contradicts with a lugubrious vocal that sounds like an uncle recovering from a Novocain shot. “The Tears of Leonard Cohen” is built on a pounding synth bass that recalls New Order, with Sam intoning in a voice that suggests both fear and self-deluded innocence; the lyrics meanwhile put a nasty and timely twist on Cohen’s song “Democracy,” a glimpse of the often political undertone of Sam’s humor and delivery. “The Booze” is a two-step toe-tapper that explodes improbably into an atonal noise solo before recovering its footing and then finding a partner a few songs later on the similarly countrified “Mountain Dew, Guy.”

One of my favorite songs on the record is the opener, “The Pride of Johnson County,” a relatively rare instrumental track. It’s two minutes of beautiful surf-inflected guitar melody; the title of the song is obviously meant as a self-effacing joke. But here’s the deal: Sam is incredible at making music, a fact that may be obscured by how accustomed we are to knowing him only as “prolific” (for those who know him at all). He really is the pride of Johnson County and may go down as one of the all-time prides of Iowa before he’s through.

This article was originally published in Little Village issue 233.