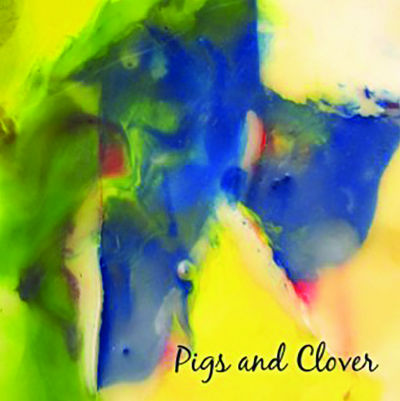 Pigs and Clover are Matt and Jamie Kearney, reliable participants at political protests and labor rallies around Johnson County. If you hear someone blowing a conch shell at a demonstration, that’s Matt. Jamie’s the snare drummer. They recently released their eponymous third record, following Raw Iowa Honey and High Crimes and Misdemeanors.

Their political commitment is all over this disc. For instance, the anthemic “Mean Wind” reliably brings down the house at political events:

Jamie drums and strums here, while Matt’s an ace guitar picker, with his harp often adding the urgent fury some of the songs call for, especially when producer Dustin Duwa overlays some electric guitar. They both write, taking primary vocals on their own songs, harmonies on the other’s.

What do they believe in? A gentle and principled anarchy. One of Jamie’s songs asks “What Would Alexander Berkman Do?”, referencing an associate of Emma Goldman. Matt reminds us that “Doing What You’re Told Is a Bad, Lazy Habit to Get In.” In “Rules” he sings, “Good folks they don’t need them, bad folks pay no mind at all. There’s right, there’s wrong and then there’s rules.”

There’s a lot more here than politics though. “Beg, Borrow or Steal” is a pretty straightforward love song, “Sorry I Treated You Bad” an apology. “New World Orderly” channels work rage. “Girl From the Island of Misfit Toys” could almost be one of Donovan’s spacier numbers.

Jamie’s songs tend to be structurally sophisticated, reflecting her background as a poet. Matt, especially, can be funny as hell, as in this awesome quintuple rhyme: “Whichever pro-war corporate whore millionaire you want to vote for/One thing’s for sure, they’ll be fucking the poor.”

The lyrics are so sharp on these songs, the temptation is just to quote the whole record. It’s more rewarding, though, for you to listen to it for yourself.

Smart, heartfelt, funny. What more could you ask?

This article was originally published in Little Village issue 194.