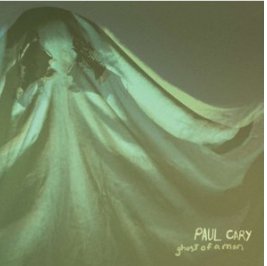 Paul Cary’s nasal squall of a voice–familiar to fans of his former Iowa City band The Horrors–is irresistibly rough. And on Ghost Of A Man, the vintage microphones and elderly spring reverbs turn his voice into something that exists out of time. It’s as though he was the guy who got thrown out of Sun Studios in the ‘50s for smoking up in the bathroom. The artfully low-fidelity recordings (by Johnathan Crawford and Mike Lust) soak Cary’s songs in nicotine-stained ambiance.

The world hardly needs more music like this. Leaving aside the ‘50s masters of the rock idiom, there’s Tom Waits, The Blasters, The Cramps and dozens of lesser bands recycling the blues tropes Cary explores on this record. Cary rises above with a combination of attitude and execution. The attitude is loose, fearless, with a bit of a swagger–he lets it rip, like a guy three drinks in telling off his boss. The execution is relaxed and has a precision that’s never careful; he’s done this enough that it’s always in the pocket, even when he’s swerving recklessly, like an experienced drunk driver.

I’m not saying the man’s a drunk–though he does sing in “Green Monster” of being “full of liquor and hate”–but he’s studied so long and hard on how to sing & play his remarkably modest, scuzzy masterpieces that his performances have the freedom Kris Kristofferson deemed a synonym for nothing left to lose. He might tell you “bad people make the world go ‘round,” but he transforms bitterness, disappointment and rage into music that makes you feel good.

Cary will be playing @ The Blue Moose on Oct. 23 with Liberty Leg.