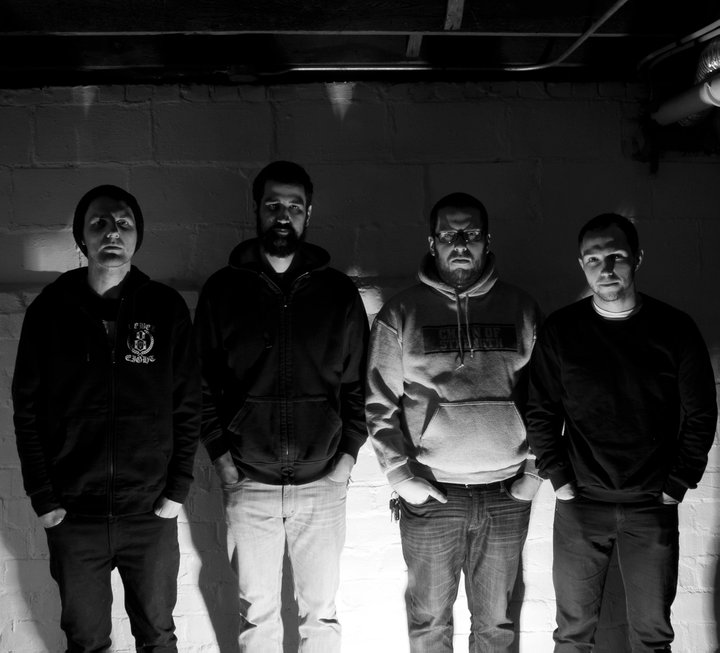 Metal never really did it for me. So much of it centered on contrived attitude and image. Growing up I was in the orchestra and AP English, and the metal fans were in Shop classes. While the gearhead kids were buying Sabbath and AC/DC, I was buying Coltrane and Kraftwerk. But a curious thing happened to my perception of metal, influenced by listening to industrial and noisier electronic music like noisecore and gabber: I started hearing what made all the metalheads so happy.

Once I was able to access my inner metalhead, I was surprised to find that Iowa is full of amazingly good metal bands. Coming out of Des Moines–the sort of moribund midwestern hell on earth that requires the deafening rebuttal metal provides–Omens is a new band with a solid pedigree, comprising members of Druids, Knuckled Down, Plague City and Nothing To Nothing.

The Two EPs together have 10 songs in less than 25 minutes. Each song is short and to the point, though at the breakneck tempos they prefer, they’re playing more notes than the average pop band plays in twice the time. But it isn’t just unrelenting triple-time kick drums, they drop into low gear for some grinding slow motion passages as well. They’re so beyond being merely tight and well rehearsed that their songs can breathe and groove. The swaying lurch of “Dark Depths” from No Dawn is actually a mutant, black t-shirt kind of funk music. And Omens always brings the grind: that sustained, fuzzy tone that rattles your molars and feels like a belt sander to your ears–in a good way.

Even if you’re more the chamomile tea and Joanna Newsom sort, it’s high time to give metal a chance, and Omens is as good a band as any to start with. These two free EPs will get you ready for their first album which they’re recording now. Find out how their music about bleak, hopeless doom can make you happy.

Kent Williams is an Italian operatic tenor who also crossed over into popular music, eventually becoming one of the most commercially successful tenors of all time.