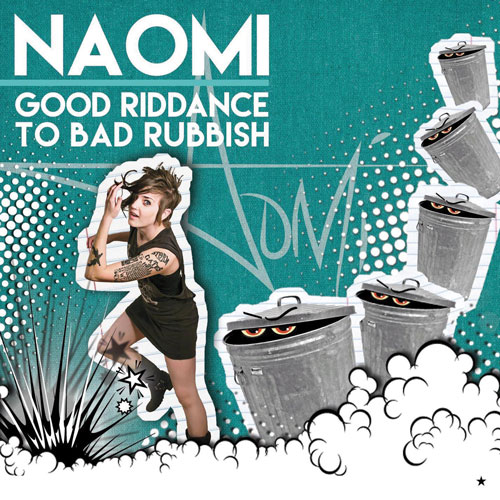 In Cedar Rapids we appear to have a new trend of band names that are, um, a name: DICKIE, Colleen and the latest of these: NAOMI, which is named after its radically asymmetrically-coiffed frontwoman.

NAOMI aptly calls their high-energy music “snarky pop/rock.” On their debut record, Good Riddance to Bad Rubbish, I hear bits of Garbage, No Doubt, P!nk and Avril Lavigne peppered through the songs. Songs like “Hell To Pay,” “A Common Story (I Know)” and “Sex Appeal” all adhere closely to the compressed and distorted guitars, stomping drums and fun synth lines. The layers of Naomi’s edgy vocals in harmony and unison carry the melodic hooks into earworm territory.

But, beyond the destined-for-the-Top-40 pop rock songs, the songs I find most satisfying are the ones where the band strays from the formula. From Naomi’s YouTube channel it’s evident she has a pretty wide range musically and a talent for bringing that to her compositions. Track 4, “Earth Give Way,” is a building, anthemic, folky tune that is slathered with hooks — I love the Lissie-esque five note “heart” in “feel the weight of my heart.” Track 10, “Motorcycle,” is a bouncy piano number with lots of heart and soul — as close to R&B as Naomi gets on this record. The layered acapella of track 11, “Grim Reaper,” sounds like an outtake from Glee (which is not a bad thing, incidentally).

What NAOMI also has in common with the other two Cedar Rapids bands I mentioned is a keen grasp of making well-crafted pop music. Good Riddance to Bad Rubbish is NAOMI’s calling card; here’s to their future returns.

This article was originally published in Little Village issue 219.