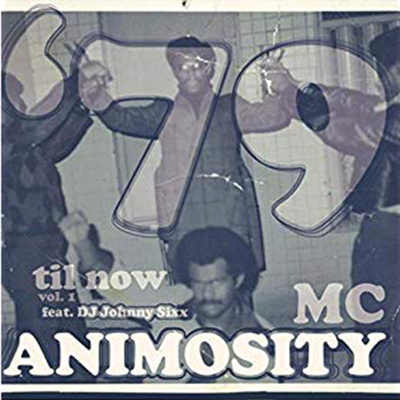 Ohio native MC Animosity has been making music in Iowa City since 1998. He currently serves as lead vocalist for the Uniphonics, who have opened for the Roots, Wu-Tang and many more amazing hip-hop, jazz and rock-influenced artists. His latest project, ’79 Til Now, Vol. 1, with production from DJ Johnny Sixx, discusses his personal growth, family inspirations and future goals.

The album opener, “20 Blunt Salute,” starts with a calming jazz melody accompanied by background adlibs explaining Animosity’s trials with — but appreciation for — chronic breaks. Battling with wanting to feel that company once again, Animosity admits how clear-headed he becomes — maybe even better off — while sober.

“20 Blunt Salute” ends with a sample of Snoop Dogg’s “Doggy Dogg world,” re-establishing Animosity’s appreciation for the beginning of the gangsta rap era. Later, the album also samples 50 Cent’s 2003 hit “In da Club” on “Raven Allura,” a song about his “pretty princess niece.”

At track two, we are introduced to “Amber Marie” — an educated, attractive, God-fearing sista who pushes him to be a better person. We learn memories they had growing up and many of her other character traits that make you want to be just like her.

There’s a clear vibe of growth and confidence with this project. The highlight has to be “One Day,” a song about looking forward to being reunited with loved ones. MC Animosity embodies hip hop’s goals of motivational growth, love and community development. He expresses you can find new parts of yourself when being lost. Life is a game, but love is the treasure.