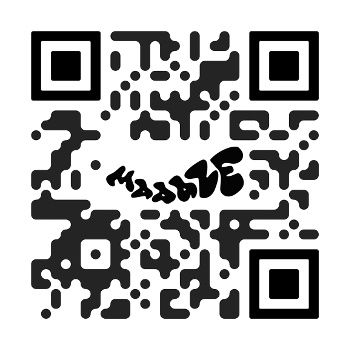 Some in Iowa City might recognize Dan Miller as a fixture at Gabe’s Oasis, hosting open mic nights every Tuesday with house band Next Door Four, as well as having played for the last several years in his group Doc Miller. Others might recognize him as the videographer from the live music series No Touching Sessions, where he and sound engineer Crystal Sherman produced a series of mini concert films in an effort to keep the Iowa City music scene active and alive in people’s minds during the height of the pandemic. Soon, though, he may become best known for his newest collaborative project, MAAAZE.

MAAAZE finds Miller teaming up with Doc Miller drummer Patrick Montag and Cedar Falls bass player/guitarist Lars Lee. As a sign of a true team effort, all three are credited on synthesizers. The trio kicks off their emergence with another pandemic recording, their debut EP, MAAAZE Vol. I. At three songs in 15 minutes, Vol. 1 is a brief psych-rock trip, an enticing taste of what may yet be to come.

Opener “Talking to Me” jumps right into the brain with a bouncing bass progression over snappy percussion and crunchy guitars — it’s like getting an invite to a dance party where everyone’s carrying switchblades. Echoes of Detroit garage revivalists the Go come to mind, as MAAAZE shows off their ability to write riffs that are both fun and edgy.

“Temples” continues the grooving, coming on like an aggressive version of Supergrass (Miller’s vocals, especially, summon thoughts of Gaz Coombes). It’s another up-tempo song with some bite. It kicks around for a while before descending into a maddening psychic swirl of flange-warbled vocals, UFO synthesizers and guitars ingesting their own feedback. All of this plays up the contrast of the quiet open of the final song.

Though “Burn It Down” ends the album it comes across more like a mission statement. Its mood plays somewhere between a dirge and an anthem. Its coherence lies in the rhythmic play between the acoustic and the bass guitars. The drums accent the rhythms, creating a lilt to the march of the song. Much like the drums, the electric guitars come in and out, their melodies (or counter melodies) put emphasis on the phrasing of the vocals. The atmosphere, as it builds, reminds me of the Black Angels album Passover, though MAAAZE accomplishes this more with melody than drone, but the dark side looking in vibes are kin.

“Burn It Down” plays like a stuttering march with brief interludes where the bass kicks on and twin guitars crescendo into each other like waves. It plays this back-and-forth until the drums finally tighten down into a stricter beat, the bass and rhythm guitars come in mirroring each other’s melody all to summon a screaming guitar into existence so it can bash its head on the edges of the psyche.

As if that all wasn’t enough, MAAAZE Vol.1, all 15 minutes of it, is accompanied by a music video that Miller edited from public domain videos from the ’50s through the ’80s. All in a day’s work. So if you want a quick experience, do yourself a favor, turn off from what you’re doing and tune into the world MAAAZE has created. It’ll get you far out in no time.

This article was originally published in Little Village issue 299.