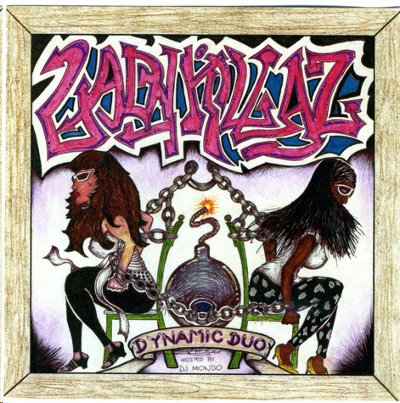 Lady KillAZ is Lyssa and Klymaxx, two young women who reside in Cedar Rapids, and Dynamic Duo is their debut mix tape. Since I’m a middle-aged white guy my taste in hip hop runs to the classics from the ‘80s and newer ‘conscious’ rap. Lady KillAZ on the other hand are ghetto and proud. They don’t give a f*ck what a geezer like me might think of their beats and rhymes.

Which is why I find them irresistible; Lyssa and Klymaxx are two bad bitches and I mean that with the utmost respect. They lead off with their declaration of purpose “Shitted On Them,” where they opine “I don’t bite my tongue for no one, that shit hurts! Walk round town being fake yeah that shit’s worse. These girls swear up and down that they know me but real recognize real that you haven’t shown me.” All righty then!

The booming Atlanta-style 808 beats are perfectly filthy. They’re other artists’ instrumentals or perhaps originals by their DJ, DJ Mondo, but it’s all trunk-rattling cream. Lyssa and Klymaxx have fluent, fluidly phrased flows and their voices are so similar that I have to listen closely to tell them apart. They make that a strength; they sound like one MC with two voices, which is a hell of a trick.

Hip hop has always been split between music intended for a mass audience and music by and for black folks that makes no apologies for not representing positive family values. Lady KillAZ are that second kind. Cursing? The N word? Obsession with money? Threats of violence? Sexism? Everything about hip hop that makes folks uncomfortable, Lady KillAZ is slinging by the pound. In “Booty Wurk” the ladies spit from the point of view of exotic dancers with really bad attitudes: “I blow your brains out like Nintendo, f*ck a Wii.” They’re even mean about your choice of video game console! This is some nasty, low-down ghetto shit and I wouldn’t want it it any other way.