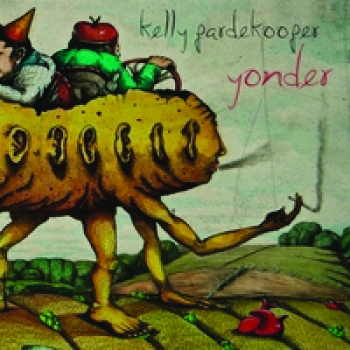 An oft-quoted rule-of-thumb for writers is “write what you know.” Great written works are usually imbued with a strong sense of place derived from the writer’s ability to pull that little bit of themselves in–people, places, conversations, situations.

Kelly Pardekooper lived in Iowa most of his life and recorded five albums of Grade-A Iowa Americana. Though a relocation to L.A. a few years ago seemed to silence this bard of the cornfields, a recent embrace by the tastemakers that are the music supervisors for television shows like True Blood and Sons of Anarchy may have sparked inspirations.

Titled Yonder, Kelly’s new album might be considered a postcard to Iowa from the valley’s of L.A.. Its local flavor was added by producer Bo Ramsey, who also plays guitar and sings on it. Joining Bo are his veteran sidemen Steve Hayes and Marty Christensen.

While it might be tempting to lump Yonder in with other albums that have been graced with Bo’s production, the difference lies in Kelly’s unique sense of humor and delivery. Yonder is infused with his familiar plain-spoken Eastern Iowa perspective and experiences. The characters in his songs are ones we know–the punker coming to grips with age, the ticking timebomb drunkard relative, the ex-lover.

Regarding that punker–she’s in the breakout song, “Mommy Was A Punk Rock Queen.” His colorful third-person account of her is at once funny and endearing. Props for a nice lift of The Sex Pistols when he sings, “She wants to be anarchy!”

While the sunny shores of California might be tanning the skin of Kelly even in winter months, when he writes about what he knows–as he sings in “Where I Came From”–it’s from “the corn, the weed, and the beans.”