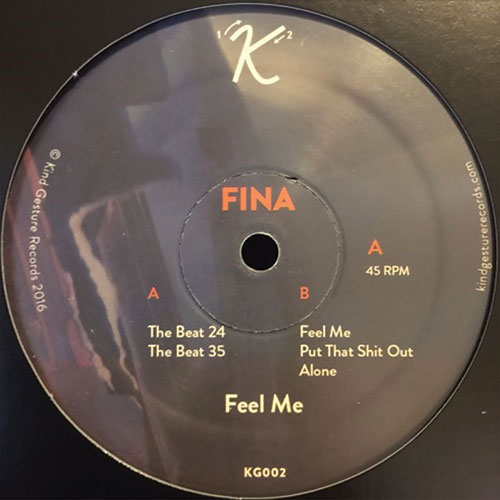 Electronic dance music’s natural habitat is a dark room with the sound system turned up until the bass hits you in the solar plexus and your fillings vibrate. The Feel Me EP attacks that milieu with a subtlety and gentleness that seems out of place on the dance floor. In the opening track “The Beat 24,” the rhythms are appropriated from Chicago juke, which trades in frenetic, curb jumping house beats sped up to 180 BPM. But the melodic material that floats over it feels closer to the wistful lushness of Boards of Canada.

Feel Me is the second release from former Iowa Citian Jacob Hopes’ Kind Gesture label. Hopes touts Josh Fina as a “reclusive Chicago producer.” Fina has embraced the headlong rush of the juke and footwork dance music styles that have exploded in the Chicago underground over the past decade, but brings a sense of delicacy and restraint to his beatmaking. Where footwork tracks lean on jackhammering kick drums and sped-up R&B samples, Josh Fina has a love for ambient textures and muted synths; it’s not so much music for the street but for the third floor walk-up loft overlooking the street.

“Put That Shit Out” seems built mostly out of vocal fragments from a woman singing, set against the kind of off-kilter, heavily swung hip hop beats that drive Flying Lotus’ music. Some of the dreamy, untethered floatiness comes down to production decisions. His drums don’t dominate his tracks the way they’re “supposed to” in electronic music. The foreground is definitely the synth chords that float like cumulus clouds on a bed of quiet clicks and crackles.

On “Alone,” frenetic scattershot drums are offset by music box melodies that fall in and out of time. Wordless female vocal samples blanket calm over the restless rhythms. The half-speed snare backbeat recalls the slow skank that drives dubstep, but there’s no manipulative buildup to a drop; when things really get going about halfway through, it’s the wordless singing that provides the drama, not a combination joy-buzzer/duck-quack baseline.

Josh Fina wants to have it both ways, it seems: intricate, hand-made beats and wistful, billowing minor chords. It’s hard to say which one is the cake, and which one is eating it too; either way this is a sweet mini-album.