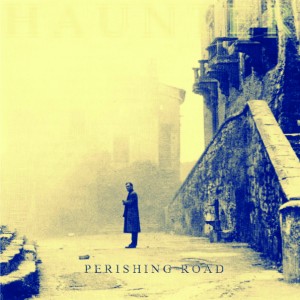 The full-length debut, Perishing Road, from Haunter (a.k.a. Kyle Arthur Miller) is ideal for late nights, headphones and staring out at the frozen tundra. Miller’s new collection of ambient compositions rewards those who put in the time, with headphones bundled around the ears. Perishing Road is a feast of guitar drone interplay.

Miller draws so many different tones and textures from his guitar. Despite the shifting sonic palettes, he keeps a consistent mood. “Éclatant dans la banalité totale” opens with a warm up of sorts: Miller plucks around on a series of random notes as two other guitars trade escalating and receding wails, rise and fall together, then finally soar off to nearly ear-piercing heights. Around the three-minute mark, new sounds drip, melt and bleed from the stratospheric wails, filling in the middle and bass registers. The rest of the piece sounds like an orchestra doing warm ups as it slowly carves a new path through a mountain range.

“Twost” emerges gently from the last gasps of “Éclatant’s” fuzz. The second piece dances and flutters around like snowflakes refusing to land, but eventually, all is swallowed by the mammoth guitar drones of “We walk through darkness on perishing roads.” The sequencing of the top half of Perishing Road is masterful; the pieces fold and unfold into one another with bonds so strong that each one feels composed to complement the previous.

It’s not until the closing tracks that anything seems amiss. On “Lone the lostern” Miller favors a nearly unvarnished guitar tone and loops aimless guitar over clunky strums. The cleaner tone and the heavy thrums lack the elegance or the imposing strength of the earlier compositions. However, the eighth piece, “In whispered hallowed malcontent,” smooths out leaden guitar strums and utilizes the clean guitar tones to sound like a tropical bird cawing over a field of cicadas.

John Schlotfelt is tired of waiting for the baseball season to begin.