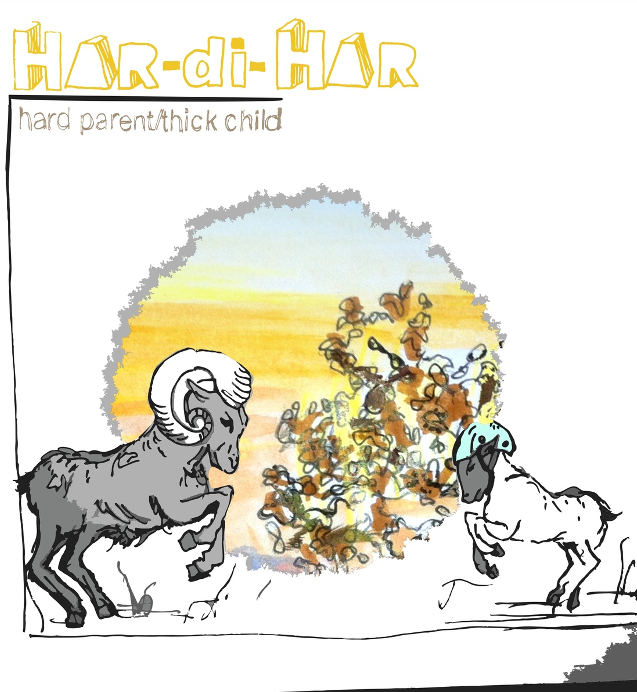 In the laundry, shorts and t-shirts remind me that summer is over. After a brief mourning for the lost season, I banish them to wash not to be seen again until next spring. After much resistance, I resolve to switch the thermostat to “heat” as if it was the last defense of the impending colder weather.

This chant echoes in my head—an unplanned soundtrack as rain and leaves fall to the ground outside my window. This chant is from “Once Branches” off the husband and wife duo Har-di-Har’s third EP titled Hard Parent/Thick Child.

During the time since their last pair of EPs in 2012, Har-di-Har has toured incessantly, giving new polish and confidence to their songwriting and performance. On the new EP, the pair once again brings their hair-raisingly stunning vocal arrangements—on par with the vocal harmonies of bands like Fleet Foxes. These harmonies are incorporated into a maturing selection of tonality and dynamicity. “We’ve Been Missing,” for example, has such dramatic swings in tempo and mood that it could be considered to have distinct musical movements.

The songs also show a maturing in production. It’s easy allow myself to be surrounded by their rich wall-of-sound arrangements. I can see the Stereolab influence in “Move Over Forward”—if Stereolab hadn’t concerned themselves with the bleeps and bloops of analog synths and relied only on drums, piano and guitars.

Har-di-Har is the band that I declared my 12th-hour dark horse contender of favorite releases for 2012 and Hard Parent/Thick Child is an easy pick for top releases of 2013. I find its bright, tightly woven percussion and warm vocal harmonies a relief from the cooler and more melancholy weather to come.