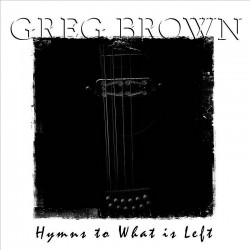 Greg Brown
Hymns to What is Left
gregbrownmusic.org

Following a nearly-aborted album in 2011 (Freak Flag, which I reviewed in LV issue #103) Greg Brown was quoted as saying, “I enjoyed it; even though it was a bitch—what with the lightning, mixing problems, etc.,” he admitted, “it got me interested in recording again, and I hope to put out a few more low- key, small pressings… smaller and smaller is my goal.”

Just over a year later, Brown fulfills that de- sire by recording and self-releasing Hymns to

What is Left—an album stripped to the bare essentials—no drums or bass. The album continues the winning formula of Brown on acoustic guitar and signature gravelly baritone (except for the surprising falsetto in “Beshams

fill out the sound are Bob Black on banjo, Al Murphy on fiddle and longtime friend Dave Moore on button accordion. Brown taps in his family as well, with daughters Constie and Pieta and wife Iris DeMent all contributing vocals.

Brown takes the opportunity to present his version of “Brand New Angel” which he wrote for Jeff Bridges to sing in Crazy Heart. I get a self-conscious chuckle out of his ode to weight gain “Fatboy Blues.” (My pants keep getting tighter, but it’s not because I’m aroused / I can’t fish out my lighter or loose change / now, I guess I’ll get a fanny pack— if they come in size 52.)

“All of Those Things” has taken the place of “In The Dark With You” as my favorite Greg Brown song. Its uncomplicated, circular lyric of contrasts—I’m a poet, I’m mute / I’m ugly, I’m cute / I’m rich, destitute and I’m all of those things with my baby—and melody delivered with passion and reflection makes this one of the standout tracks.

Greg Brown’s ability to return to the creative well for 25 albums is impressive, but Hymns to What is Left is quickly becoming my favorite. It’s an observational quilt, a patchwork of wry wisdom with frayed edges, melancholy, but laced with acerbic wit and occasional joy. The perfect wrap for the coming colder months.

Michael Roeder is a self-proclaimed “music sa- vant.” When he’s not writing for Little Village he blogs at http://www.playbsides.com.