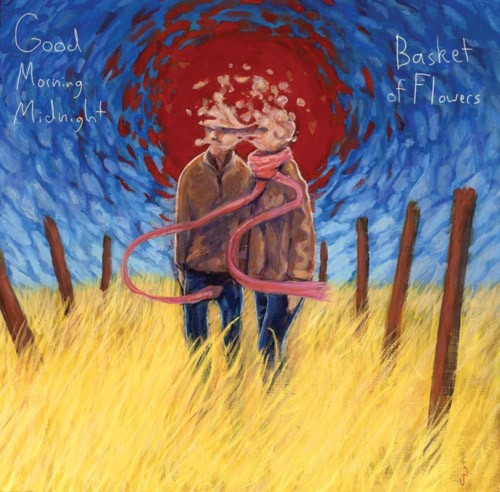 The ’90s, in its sentimentalities and aesthetics, holds a certain hankering for its glossy, bouncy pop music. From Oasis to Weezer, there’s an implicit innocence at odds with an ever-corrupting world. Recreating the sensibilities of this era, Iowa City singer-songwriter Charlie Cacciatore’s solo project Good Morning Midnight is releasing their debut album Basket of Flowers on July 21. CDs are available through Nova Labs, and the Iowa City release show will be September 15 at The Mill.

Recorded over the past year at Luke Tweedy’s Flat Black Studios, Cacciatore arranged the full-band numbers based off their solo folk songs. The two-parter “Burial Ground / Breeding Ground” displays a precocious Cacciatore, with a musical ability that connects a Wikipedia definition of “indie rock” with power pop’s emotional valence and the inflections of alt-country.

Cacciatore’s voice ranges from sonorous hushes to dreamy wails, doubled down with Nora Petran’s backing vocals. These two cuts showcase the breadth of Basket of Flowers.

“Permanently Red” features at its height the capabilities of Cacciatore’s songwriting: jangly swagger on guitar, drummer Joryn Brown holding down the pocket, loopy interludes via Brendan Spengler on keys and modernist lyrics. Their syncopation, however, depends on the capabilities of the studio, layering these lines to maintain its fluidity. Throughout Basket of Flowers the ambition of the lyrics — and their delivery — contends at times with the sheer rhythmic catharsis of the instruments. And there’s no shortage of riffs; seven of the 11 tracks clock in near or past the five-minute mark.

Most listeners’ first urge will be to compare Good Morning Midnight to Pavement. Cacciatore’s songs have a clever penchant for earwormery. But hidden beneath that veneer are songs more akin to Stephen Malkmus and Bob Nastanovich’s project with David Berman, Silver Jews — poetical lyrics threaded by boilerplate country licks. Cacciatore’s songs depend heavily on these tried-and-true voicings. When the full band steps back in “Daytime Song 1,” Cacciatore’s strutting acoustic guitar peels back for them to conclude, “Love is a business”.

Basket of Flowers is Cacciatore’s Bildungsroman, dealing heavily in Midwestern romanticisms: summertime car rides, cigarettes, hospital visits, retail stores, the exchanges we make for love. They’re a deep feeler. At 19 years old, the world has yet to fully enmesh Cacciatore. When it does, we’ll hear from a songwriter and storyteller with the erudition of Berman or Bob Dylan or Lou Reed.

This article was originally published in Little Village issue 224.