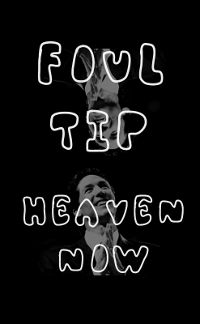 Reviewing the latest EP from Foul Tip is, well, sort of a challenge. The duo’s second release, Heaven Now, has a bit of an identity crisis. Four of the cuts on the cassette are propulsive, evocative chunks of post-punk and three of the tracks are goofy, but still mostly hard hitting. However, two of the songs are so successful, it really doesn’t bear mentioning the remaining five in such a short write-up.

“Lifter/Leader,” like its weight-training protagonist, is all hard muscle and brawn. The duo tells the tale of a professional bodybuilder over the kind of high-octane rumble that ought to soundtrack weight rooms worldwide. Ed Bornstein (of T’Bone) lays down a no-frills, six-cylinder drum part that keeps the track roaring along while the overdriven bass work of Adam Luksetich (The Tanks, Big Box) lends “Lifter/Leader” a head-bobbing syncopation. The lyrics are spare but clever, both highlighting the musicians’ skill and mimicking the drive and single-mindedness it takes to survive and thrive in a career of bodybuilding. These are best exemplified in the barked orders of the chorus: “Sweat! Pose! Win!”

“Northern Home” operates on an entirely separate level from the rest of Heaven Now. Luksetich pulls double-duty and rips off some eerie guitar licks that cap off each chorus–replete with overdubbed ghostly feedback wails. Beyond the guitar accents, Bornstein and Luksetich also show a real dynamic range. The bouncy opening with the clean burbles of bass and upright strut of the drums provide the backdrop for the duo’s desire for their titular Northern home and “cool breezes indefinitely.” However, after the command that we “pack up” cause “it’s time to go,” Luksetich’s guitar goes haywire and lets off a torrent of buzz-saw licks while Bornstein’s strut gets tribal and he finds room for a few machine gun fills before the track fades out.

I don’t know if it’s a coincidence, but both “Lifter/Leader” and “Northern Home” have an additional lyrical credit for Flat Black Studio guru Luke Tweedy.

John Schlotfelt is a fan of tie clips and hopes you are too.