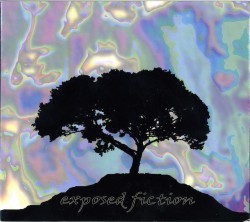 Exposed Fiction’s self-titled debut album arrived at my house with a big crack through the middle. It’s romantic to imagine the music is that powerful, but it’s more likely the Postal Service or our intrepid publisher Mr. Steele broke it accidentally before dropping it off. No matter. You can listen to (and buy) it on the band’s Facebook Music Store page. What’s remarkable to me about their music is the way they soak up influences from across several decades, though to my old-guy ears it’s obvious they’re intimate with the music of Neil Young.

They don’t sound that much like Young, exactly, except when they break out the harmonica. But instead of imitating, Exposed Fiction have picked up on Young’s ability to meticulously apply craft, while still staying loose enough to swerve off in surprising directions. The lyrics are simple without being simplistic. On “Worm Food” the first verse is about rainbows and “walking the way the wind goes,” but the second, just as bouncy, announces “every now and then I like to think how we’re all dying, one day at a time just like fresh cut flowers drying,” sung with the same care-free bounce.

Sonically, the album is anchored by the band’s guitars with the drums playing a subtle, background role. It may be an accident of home recording, but there’s an appealing tonal darkness to the songs. They’ve avoided the pitfall of hyping the high frequencies that’s so prevalent amongst a generation already half deaf from too many hours listening to cranked iPods. It’s a sound close to that favored in the early ‘70s while still feeling current.

What is ‘exposed fiction’ anyway? It could be revealed falsehoods, but it could also just be fiction—stories brought to light.  Either way this is a record with some good songwriting and playing, whose sincerity shines through without baring everything on first listen.