That’s All I Wanted
elizabethmoen.com 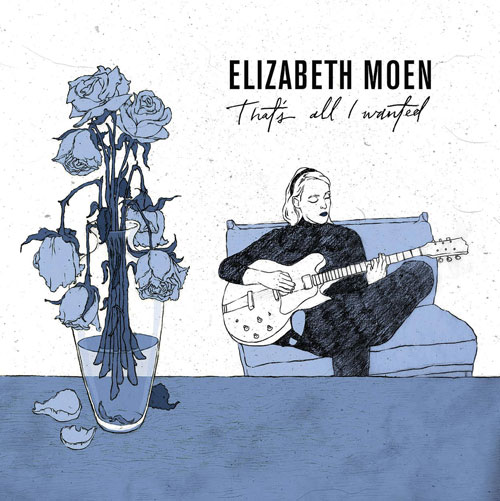 On her sophomore output, That’s All I Wanted, Elizabeth Moen ditches the acoustic guitar for a full ensemble of electric guitars, bass and percussion (and one piano ballad). Her record embraces the hollows of Luke Tweedy’s refurbished barn-turned-recording-studio at Flat Black Studios — she transfigures folk into an experience in the totality of instruments. But her vocals never shy away from the driver’s seat.

There’s something to be said for the deftly muffled result of strumming with a thumb versus a guitar pick. Moen, as well as guitarists Joel Anderson and Dana Telsrow, highlight the musical restraint of this record to give way to Moen’s howls and croons and hushes. Drummer Justin LeDuc (and Mike Schulte, who features on “Bedside Table”) brushes jazz-inspired polyrhythms, while bassist Blake Shaw riffs off these meters.

That’s All I Wanted opens with two percussion-less tracks: “Mars” sets the record with an ambling guitar lead, straddling blues progressions familiar to Moen’s debut album with pop-jangle sensibilities, while “Trouble” features limber Americana noodling. Both tracks set an airy atmosphere soon overwhelmed by Moen’s blue-eyed soul. Throughout That’s All I Wanted, Moen’s melismatic singing (accompanied by back-ups by Annalibera) has been brought to the forefront.

The album reveals a singer-songwriter haunted during the early hours and by the spectacle of intimacy. On “Trouble,” her duet with William Elliott Whitmore, Moen calls out, “Trouble — they can hear us, and it’s almost three / Trouble — they know I’m on my knees.” Together Moen and Whitmore sustain the climax of the song: “The trouble ain’t you — oh, the trouble is me.” But this further mystifies what the trouble may be.

The way in which Moen has handpicked Iowa musicians creates a soundscape that enlarges the felt moments in her vocal delivery. The lyrical content abides by the just-you-and-me canon of folk music, lending itself wholly to the ebbs and flow of the instruments backing her. Moen seems to be following a musical trajectory similar to that of Iowa roots and folk musicians, such as Pieta Brown — albeit striving for a glossier sound also derived from blues, R&B and jazz.

Pianist Michael Jarvey concludes the record on keys with the hymn-like “Snap,” where Moen makes the testament that this is an album for another. She vibratos, “No one’s sure who I’m singing to / You should know I’m singing for you.”

That’s All I Wanted is an album meant to be experienced between two people, such as a coffee shop in the wee hours where there’s only one customer and one barista in the room. It feels as though there’s a world between these two people — but the world is also looking in on them.

This article was originally published in Little Village issue 220.