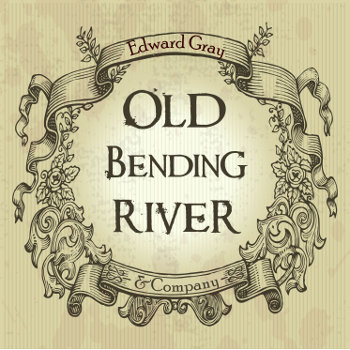 It’s impossible for me to be objective about Ed Gray. I’ve seen him play more shows than I can count and I still don’t know what to expect. I’ve been at his house when he comes home from his shit janitor job and mixes a drink to wash the taste of a working man’s humiliation out of his mouth. I can’t wait to see what odious pop warhorse he will turn curiously affecting with his transgressive cover version. “Wildfire?” “Rhinestone Cowboy?” As Garrison Keillor said of Claudia Schmidt, when Ed sings a song, it stays sung.

Old Bending River comes five years after The Late Gray Ed Great, a superlative album of Ed’s broken-hearted Americana. Ed has an intimate baritone that makes you lean in to catch every word. His conversational lyrics find the surreal in the mundane and the heartbreak in the quotidian. His singing ranges between a bus-driver’s grumble and a homeless schizophrenic’s bereft howl.

“Samson” might remind you of Tom Waits’ savage country waltzes, but even the venerable Tom never came up with a lyric like “Hey Storyteller, please spare the details, as the noise from your throat is like wind through slit sails.” “Egg Timer Man” sounds a bit Stephen Foster, a little like Raffi’s kiddie tunes, but it asks “What now shall we burn that the room’s on fire but our feet’s so cold?” It perfectly frames an unsatisfiable yearning that tips over into self destruction.

“Why did the rat chew a hole through the wall and ignore that the door was wide open?” Ed is like that rat. As attractive and accessible as these song are, Ed never takes the easy way in. Old Bending River proves that as obtuse and stubborn as Ed Gray can be, there are few songwriters anywhere that are his peer.