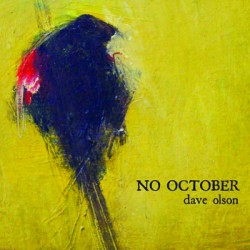 “What’s that place that she came from? A little town a couple miles from where the plane of Buddy Holly went down.” – Dave Olson, on “Buddy Holly”

“Buddy Holly” with its Clear Lake reference wraps up No October—the latest album from Dave Olson, a Twin Cities-transplanted former Iowa Citian. Though he’s been away for a while, it’s clear that Iowa still provides him with inspiration. Living in Iowa and Minnesota provides Olson with a superstar backing band made up of Pieta Brown (who duets on the Tom Waits cover “Georgia Lee”), andl the similarly-transplanted Benson Ramsey (The Pines) contributes keyboards. Carl Broemel of Kentucky band My Morning Jacket steps in for some help as well.

Olson shows shows his Iowa roots in his songwriting and music. He’s primarily an acoustic folk-country-blues guy with lyrical storytelling that reminds me of Greg Brown and Dave Moore. But his vocal style is closer to Joe Henry, or Glen Phillips from Toad the Wet Sprocket.

The care Olson takes with his lyrics make his songs stand out from the crowded field of singer-songwriters mining the same vein of earnest Americana. I find myself smiling at the neat turns of phrase and subtle humor found in lyrics like “I drive to Tulsa the same time each year. October makes me think of her and there’s no October here,” from the title track.

Olson’s mix of effortlessly economical songwriting and polished performances makes No October a wonderfully compelling listen each time. While Olson may have no October for himself, he perhaps has provided the perfect soundtrack of the coming falling leaves for the rest of us.