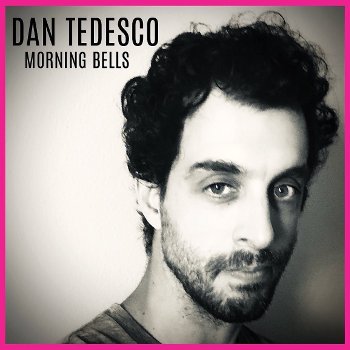 It can be a dicey affair when an artist who operates in traditional songcraft decides to experiment. They risk alienating some of their audience, while the new audience segment they attract may not appreciate the existing back catalog of their more “standard” fare. Dan Tedesco’s excellent new EP, Morning Bells, manages to navigate this territory and come out with something rare: a three-song collection of well-crafted (not to mention pointed) songs that also explores some interesting sonic territory. It is ambitious, but doesn’t neglect what came before.

There is no traditional percussion in these songs, no drummer on a kit. The rhythm section takes the form of hand claps, shakers and general banging on things (but in ways that make the songs more interesting). And the EP won’t be released in a traditional manner, either — Tedesco is dropping one song at a time from February through April on his Music Channel, a site that works like a more interactive Patreon, where he can supply unique content to his fans and offer a way to interact with him directly. This EP won’t be released on any streaming services; the Music Channel is the only way to get it. It’s an innovative release strategy that demonstrates how serious the man is about his music and connecting with his audience, and I don’t think I’ve seen a model quite like it.

Opening track “Firecrackers at Dawn” sets the tone with an eerie vibe, drawing you in with Tedesco’s warm, haunted, Paul Simon-esque vocals. The warmth vanishes about midway through the song, though, as it bursts into a proggy guitar riff and a jazzy saxophone workout from Boston musician Evan Laflamme. The hook of the song is a lyric drenched in reassurance and doubt: “It’s OK for the things you love to let you down once in a while — isn’t it?”

“VSFLS” (Violence, Sex, Fear, Language, Substances) is a moody rant about the state of the world that builds into the EP’s most driving moments, but still remains intimate. You can hear the keys on the saxophone clicking, as if it were right up next to your ear, telling you a secret, as the world is engulfed in flames around you.

The title track is the prettiest of the bunch, but even it has a ghost, in the form of amp buzz that keeps things from getting too pretty. The tune is a showcase for Tedesco’s fingerpicking style on guitar, which anchors it and gives it motion.

Lyrically and stylistically, Morning Bells is another piece of pandemic music (Tedesco calls it out in the first song). There have been a lot of those in Iowa music the last few years — artists haven’t been given much of a choice — but Tedesco might have best captured the overall flavor of our collective dread. You can feel the frustrations and anxieties of a working musician struggling throughout this trio of songs. But, as the writer Malcolm Gladwell says, “A lot of what is most beautiful about the world arises from struggle.”

This article was originally published in Little Village issue 303.