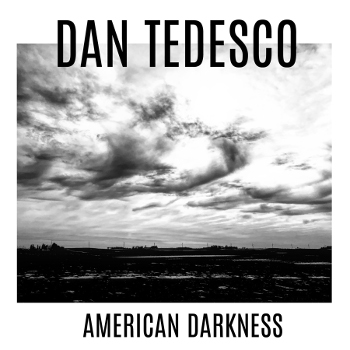 Tedesco uses this collection to, as the title suggests, comment on how sadness and disappointment are seeping through the nation, in local examples that any listener could have witnessed themselves. In “Backstage,” he sings, “Some old guy’s trying to grab some young girl’s ass / Aren’t you glad you paid that scalper for this backstage pass?” This lyric puts the responsibility in a more privileged bystander’s hands, as though Tedesco is demanding accountability for inaction.

American Darkness’ 35-minute duration makes it digestible and concise. By the time a listener gets into the groove of the album, it’s nearly over, making it even easier to put on repeat and follow the thread of ringing guitar chords planted in the background from beginning to end.

The tracklist order was the greatest barrier for this album and kept it from reaching its fullest potential. The album’s title track, “American Darkness,” allows little tonal range and pushes Tedesco’s voice to the background with multiple guitars and a more forceful drum beat. As the album progresses, the more compelling it becomes, showcasing this artist’s specific blend of rock vocals and folk guitar-picking.

“Wolves are Running Wild, Tonight,” “Lost in the Shuffle” or “Banks of the Mississippi” would make a fantastic exposition for American Darkness as lead tracks — they make the listener focus on what Tedesco can do with his voice and guitar, free of interference.

Though there are a few tracks that miss the mark, the treasures provide context for them within the landscape of American Darkness; it is, no doubt, a cohesive work.

This article was originally published in Little Village issue 266.