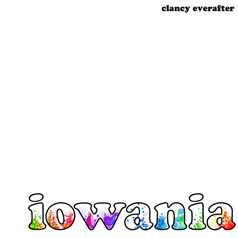 If there is one thing that you can say about the current generation, it is that it has a disturbingly high proclivity towards chilling. Don’t take this as everything being alright. For all of the fun it sounds like everyone is having, the chill vibe is laced with malaise, anxiety and wanderlust. This ambivalence towards the good life can be heard on Clancy Everafter’s excellent Iowania.

A staple of the local musical community here in Iowa City, Clancy draws inspiration from a lot of different places including country, folk, glitch, electronic and field sounds, all blending well with Clancy’s hip-hop foundation. The result is a relaxed, down-tempo vibe that flows conversationally throughout the album.

The vocal component stands out, with samples compiled from parties and gatherings playing important parts in many songs. These add to the smooth, laid back feeling that is the album’s strongest point. The lightness is deceiving, though, as Iowania carries a casual disposition into darker sonic territories, creating a real sense of duality while keeping it fun enough to continue exploring.

Iowania reminds me Donuts, J Dilla’s last album before his premature death. Although they are both largely instrumental albums, I wouldn’t compare Iowania and Donuts on sonic terms. Rather, they seem similar as artistic statements. With Donuts, Dilla produced an album that was a document of his style. It doesn’t flow well, but it aims to reveal Dilla’s core by displaying his wide breadth of production styles. I think that Iowania does the same thing for Clancy. Clocking in at 23 tracks, there are a few spots where he disrupts the flow in order to show yet another side of himself, but it remains a highly listenable release from a producer with plenty of style to spare.