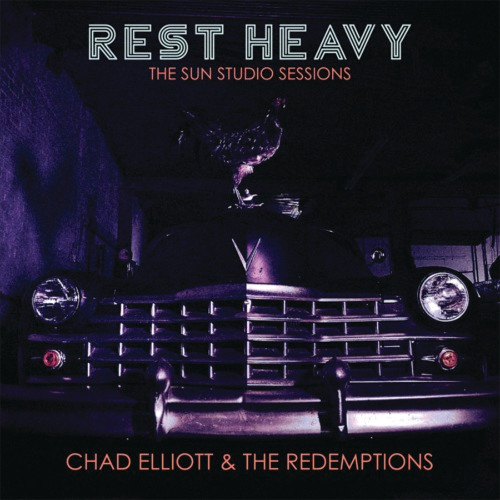 Rest Heavy, the newest release from Iowa native Chad Elliott, opens with an arpeggiated piano riff and cymbal crash before launching into a leaned-back, eyes-closed, soulful-howl gospel-blues tune of which Sam Cooke would have approved. The title track perfectly sets the stage for the songs to follow, which cover serious ground in terms of genres and tonal focuses. Fortunately, Elliott easily chameleons his voice to match the tone, style and nuanced emotional inflections that each song style demands. As he croon-wails his way through tracks that range from hardscrabble stories and ain’t-life-like-that tunes to songs of somber reflection, his constellation of influences is clear, with stylized moments and melodic arrangements that evoke the likes of Tom Waits, Eric Clapton, Bruce Springsteen and Doc Watson.

While the album has many standout moments, the standoutiest is the fourth track, “Shining Stars.” The musicianship is on point throughout the entire album, but the vocal and instrumental arrangements on this track are the most restrained and nuanced, with a moody, country, Telecaster-guitar backing that creates an anthemic feeling and blends perfectly with Elliott’s somber phrasings. The ponderous, calm consideration that comes from staring at a night sky is captured in a remarkable and subtly powerful way, and you will find yourself easily singing the song’s hook, “Shining stars burn deep in the night,” long after the album is done playing.

As a whole, Rest Heavy is a high-energy, dynamic work. One of the best parts about listening to the album is the clear sense you get that Elliott is having the time of his life playing and recording these songs. Considering that these tracks were laid down at the legendary Sun Studio in Memphis, Tennessee, it’s not hard to understand why. Still, hearing the joy in an artist’s voice from the pure pleasure of making music makes that music that much more enjoyable. Rest Heavy is available Aug. 10: Check it out.

This article was originally published in Little Village issue 247.