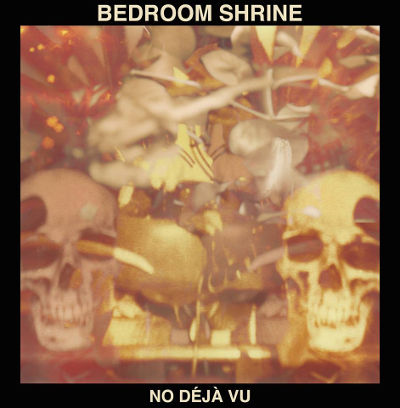 If you are a follower of the music website daytrotter.com, you have already been exposed to Johnnie Cluney’s illustrations, which give the site its signature pen-and-ink look. What you might not be aware of, however, is Cluney’s work as a musician with his band Bedroom Shrine. The group’s debut full-length album, No Déjà Vu, is a product of the Quad Cities’ tight-knit music community. No Déjà Vu is the first release for Iowa’s newest record label, Cartouche Records, run by Davenport’s Ragged Records’ store owner Bob Herington. The album was recorded by Mike Gentry at Daytrotter’s legendary analog studio the Horseshack and mastered by Pat Stolley, who also engineers Daytrotter sessions.

An album of contrasts, the layers of No Déjà Vu’s big guitar effects recall ‘90s alternative bands Dinosaur Jr. and The Jesus and Mary Chain while also featuring fragile, beautiful strings and acoustics. It’s telling that Bedroom Shrine’s original name was American Dust—No Déjà Vu is a window obscuring its songs with a sooty lo-fi patina. At times, the fluttery tape hiss that drags in the middle of the albums’ tracks add to No Déjà Vu’s complex palette of tone and sound.

No Déjà Vu is a daring narrative sung from a first-person perspective. If the title of the album translates to “never felt like this before,” then Cluney’s narrator is both grateful for love and also untrusting of it. In “Cash For Gold,” an anthem of love against all odds, he sings: “My life is like yours/We get cash for gold while our friends are all rich … I need a doctor or remedy/to set my mind at ease/and all I wanted to tell you is be patient with my love.”

There is beauty in decay. While many albums strive for perfect studio sound, Bedroom Shrine’s No Déjà Vu uses its analog mix of hi- and lo-fidelity to underscore the emotional messiness, and occasional beauty, of being human.