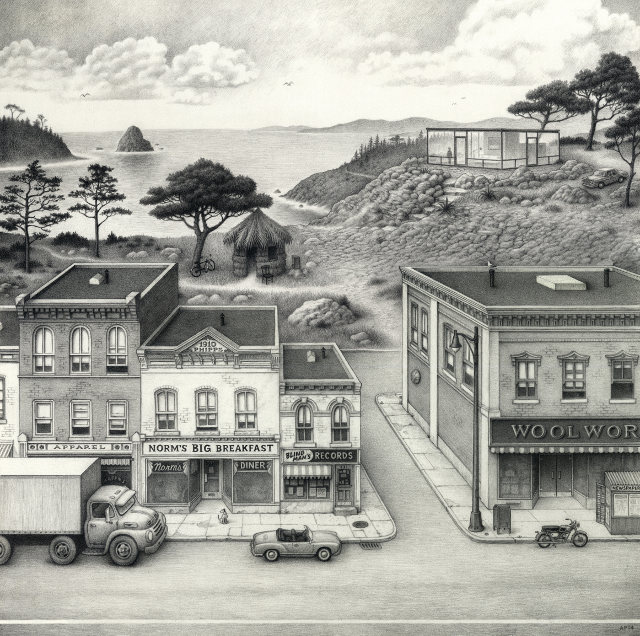 The needle drops on Barry Phipps’ The Town and an uplifting organ crackles and pops, skipping its way through a brief instrumental intro and sighing toward a jolly, aptly titled “Sunny Sunday Afternoon.” It may feel a bit too twee for a spring 2015 release, but it is catchy and beautifully arranged, and repeat listens create an emotional reassurance rooted in a kind of imagined nostalgia; it’s as if a past that can’t be placed is painting a future for us of daily routines carried out with care and civility, and neighbors remembering to love before being left to miss one another.

The Town is full of sharply and sweetly drawn characters. “American Icons of Rebellion” places Phipps as a boy who probably liked comic books and spent rainy days longing to be one of those “Cowboys smoking in the west.”

Before moving to Iowa City to focus on his photography career, Phipps was a  guitarist who joined Archer Prewitt in the pre-Sea And Cake acoustic lounge outfit The Coctails, and went on to found Tight Ship records. Prewitt drew The Town’s beautiful album cover as a faithful illustration of Phipps’ vision, including references to song titles like “Sea Rock,” “(Glass House of) Gigi” (presumably an ode to his wife, Iowa City artist and conservator Giselle Simón) and “Grass Hut of Music”—the album’s most infectious track, a sock-hopping, time-warp, island-jam of a love song.

Phipps’s eye for detail and knack for endearing portraiture aside, it helps one accept this series of sentimental snapshots to know that the whole album is itself a guestbook—a collection of Phipps’s songs, laid down over the course of a few years with musicians he was recording for various Tight Ship releases. Curious researchers can therefore revel in the album’s DNA by touring the label’s archive. As he allows each guest’s influence to come forward, one may wonder if Phipps isn’t made entirely of recessive genes, but don’t let his generosity and love for his subjects fool you—The Town could only have been captured through Phipps’s lens, and it’s a place where we should probably all spend some time.

This article was originally published in Little Village issue 176