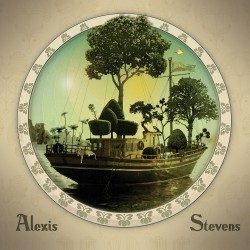 Alexis Stevens’ sophomore album is almost endlessly poignant. Stevens’ self-titled album has turned my daily commute into a bittersweet epic whose only disappointment is when work comes into view and the dream of a road trip ends as I punch the clock. There’s a reason I smell the Atlantic Ocean during my landlocked trek to work: Alexis Stevens is brimming over with wanderlust.

Stevens is famished for travel, for new experiences. She can “remember the smell of the open road,” as she sings on “(I Can’t) Follow You,” and that restlessness is all over the album. However, the easy shuffle of the drums and the wistful lap-steel lines give this folk album a comfortable lullabye feel.

Even darker tunes, like album standout “Canary,” get a lift from the impeccable arrangements. “Canary” is a stark song about being trapped, but the almost rock-like configuration lends the track some grit, and gives Stevens’ vocal performance some strength. The driving rhythm—relative to the laid-back folk stylings on the rest of the album—make the determination of the metaphorical canary seem much less fanciful. The composition really does become a spoonful of sugar. Likewise, a track like “Better” could be a downer, but a nimble bass line and sumptuous harmonies with playful coos capping the chorus make it more of a winking kiss-off.

The Flannery O’Connor quoting “A Good Man” benefits from a piano line that matches each sobering low and lofty high in Stevens’ performance. With the crystal clear production and fantastic pacing, “Good Man” feels like it could break hearts all over the bar by the time it gets to the repeated chorus at the end, with Stevens harmonizing with herself. Somewhere there’s an indie road-trip film looking for a closing song, I can almost see the credits rolling as this song plays.

John Schlotfelt is wondering how to combat writer’s block when a broken foot keeps you from running or doing jumping jacks.