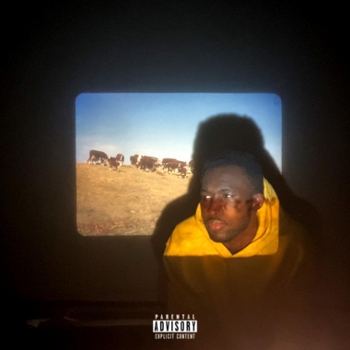 Iowa does such a great job at spewing out iconic, idealist and illuminous inspiration.

Ahzia, a Quad Cities native, established his tone for the year with the release of his latest project, 2021’s Welcome to Nowhere, released in December. He’s an Iowa favorite who has even snagged a spot at the upcoming 2022 Mission Creek Festival, a huge accomplishment for local artists.

I love the decision to finalize nine tracks for this album. It is the perfect balance of songs needed for a quick escape, to nowhere. But where is Nowhere? I prepared my ears to travel to a faraway land that would somehow also place me in the now. That anticipation of the listening experience was made even greater by the interesting album cover. Ahzia is shown in a yellow hoodie in front of a projected herd of cows. He stares in deep thought, and I wonder if this is his Nowhere—if clear skies and pleasant meadows were the inspiration to, in his words: dream, create and achieve. The album does not disappoint; it allows the listener a journey through electric instrumentals and cultivated poetry.

Welcome to Nowhere opens with “Notes by A Night Owl,” a look into who Ahzia is as a person. The lyrics discuss his search for peace and silence about the ups and downs of relationships, aspirations and setting goals. He speaks of the many thoughts that haunt him at night. Will have the same group of friends as his career grows? Will he want a wife and kids? The day leaves no time to ponder dreams because of responsibilities. Ahzia asks the hard questions of life as the track goes on. It makes me ponder who he is asking, whether it is himself or some “higher power.”

Featured artist and beautiful songstress Alysha Monique sets the mood on track four, “Sunnyside.” Her voice mixes perfectly with Ahzia’s as the lyrics reflect on how important it is to focus on the bright side of life. With the lyric, “I’m gonna take a chance on me,” Ahzia shows that he is putting in the hard work needed for a successful career and isn’t going anywhere.

The quality and foundation of this project is a great example of the community that has formed in the Quad Cities through a love of music. The recording was done by Ryan Radig with production by infamous producer Pilotkid, who has worked with artists such as Joey Badass, IDK and even Danny Towers. Accompanying Pilotkid is Z.Will, Kaz the God and Cancel Culture band member Masked Man. The mixing and mastering of the masterpiece was done by Quad Cities native Travis Harms.

Iowa continues to blaze through the hip-hop culture establishing a lane of their own.

Welcome to Nowhere, along with a host of Ahzia’s other songs, can be found on all streaming platforms. Merchandise has been finalized with plans to release soon.

This article was originally published in Little Village issue 304.