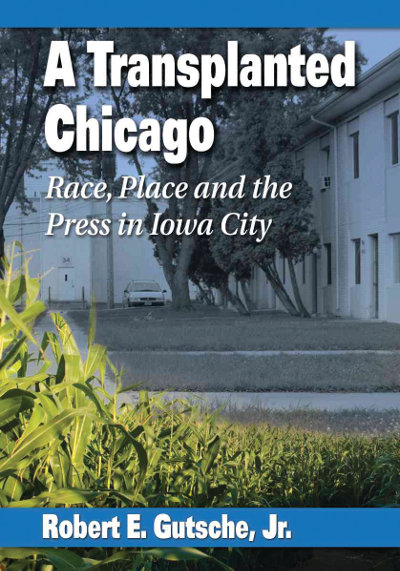 A Transplanted Chicago: Race, Place and the Press in Iowa City opens at the bus interchange by the Old Capitol Mall. It is the first place — geographic as well as social and political — that the author, Robert E. Gutsche, Jr., explores in order to understand how migration and social change have affected Iowa City and its attitudes on race. Until the Iowa City Community School District began providing bus service for City High students to the southeast side of Iowa City, the downtown bus interchange was where many of the high school’s African-American students waited for the city bus system to take them home.

It became an area of conflict between black students — many from inner city neighborhoods of Chicago — and ‘regular’ (i.e. white) townspeople. The students, just getting let out from school, were boisterous enough that the police became involved in ‘keeping order’ and responding to complaints from other travelers. It was the scene of a culture clash between “Iowa nice” and “urban” noise and chaos.

A Transplanted Chicago is Gutsche’s ambitious study of race relations in Iowa City, seen through the lens of press reports, public perception and official pronouncements. It is both a frequently footnoted academic treatise and also a personal narrative about how people in Iowa City interact across cultural and racial lines. Gutsche, who is married to an Iowa City native, received his Ph.D. from the University of Iowa.

A Transplanted Chicago is one of the first serious studies of the issue of race in Iowa City and explores the conflicts created by the migration of African-Americans from inner cities to the suburbs. A major topic in the book is the “Southeast Side” — a vaguely defined area east of Gilbert Street and south of Highway 6 — which has become a socially-constructed place, one that some Iowa City residents see as their local incarnation of social problems of America’s inner cities. Crime, drugs and violence are perceived to be problems that the the newcomers brought with them, even though police statistics show that on average more crime takes place in the student neighborhoods near the downtown.

The substance of Gutsche’s work here comprises research into archives of local media and interviews with Iowa City residents. During these interviews Gutsche asked people to draw a mental map of what they consider to be significant places in Iowa City, revealing how the interviewees perceive their environment and experience the town.

The subjective experience of Iowa City is very different for African-American residents of the Southeast Side than that of reporters and government officials. For Gutsche, the similarity between the mental maps of local reporters and government officials indicate that reporters largely accept the perceptions of the government and police as the literal picture of Iowa City. The reporting done on the Southeast Side accepts and reinforces the idea that people moved there from the ghetto neighborhoods of Chicago, bringing their inner city problems with them.

The truth about the Southeast Side is more complex. For people — both black and white — who live there, it is clearly nothing like the troubled neighborhoods in big cities. The streets are clean and quiet by comparison, and it’s unclear whether the crime rate there reflects actual crime, or more zealous (some might say over-zealous) policing than in other neighborhoods.

The myth that people move here from Chicago because it’s easier to get welfare is just that: a myth. Low-income residents are able to transfer their Section 8 housing benefits when they move here from Iowa City, but any ‘welfare’ payments are subject to a substantial waiting period. Most people who move here do so because there are more jobs, safer neighborhoods and better public schools.

What makes A Transplanted Chicago more than a dry academic study is that beneath the citations and footnotes, Gutsche’s anger over the plight of black residents in Iowa City is always simmering. It’s heartbreaking to read of black Iowa City residents saying that they don’t feel welcome outside their putative place in Iowa City: south of Highway 6 and east of K-Mart. Gutsche’s frustration is clear when citing local news coverage that injects racialized language into stories where it is irrelevant to the story. The local media especially is taken to task for reporting on the Southeast Side without bothering to do reporting in the Southeast Side.

Gutsche further elaborates on the corrosive effect media has on race relations, “… the press have operated as a social institution in times of overt racialized tension that then naturalized particular narratives about race in new discourse that continue to appear today.” I would rephrase this more directly: The local news media have perpetuated the ideas of white supremacy with real consequences for the residents of Iowa City.

Ideas like that are not generally welcome news to people who work in the press. No one likes to be accused of having a hidden racist agenda, and, in fact, the writers and reporters for local media are typically good people just trying to do their jobs. However, the problem is more subtle than that. The pressure of deadlines, the comfort of falling back on familiar tropes to give their stories structure, the friendly relationship with government officials: These factors make reporting that reinforces the narrative of white supremacy the easiest road to follow. White supremacy is a ghost in the machinery of journalism — if you don’t confront it consciously, you are by default perpetuating it.

To read A Transplanted Chicago is to be asked to make a blue pill versus a red pill sort of choice: Do we hold fast to our idealized Iowa City as a place of liberal open-mindedness and egalitarianism, or do we recognize how we perpetuate the racial prejudices as old as the United States itself?