This month, Iowa City artist Tomás Lasansky releases his monograph, Icons and Muses. To flip through its pages is to be brought back to an experience many Iowa Citians will relate to: huddling in the Java House for hours (years), pretending to read, pretending to write, caffeinating yourself into a paranoid belief that you are actually being watched by the striking portraits on the wall.

I’ve been stared down by Geronimo to my left, given the cold shoulder by honest Abe to my right, mocked by an unimpressed man-mountain of an Iowa farmer straight ahead, all while Einstein gently watches, exhausted by my dereliction of academic duty. Then there are the taunts of the wild-haired classical beauties, stuck in a French villa, in some timeless world, reveling in sun and music and drink. Thanks, art. Thanks for making my homework seem so. very. boring.

Tomás Lasansky has had a career as a printmaker for more than thirty years, has galleries in several states and is collected publicly and privately around the world. Yet, he may be best known locally for his continuously rotating collection of work on display at the Java House. This might be a bit lowbrow, especially for an artist of his caliber, but Tomás doesn’t really care about that. What he does care about is his community of family and friends, his heroes and his craft. That’s what his work is about and that’s what his new book celebrates.

Tomás was born with one of the heaviest last names in Iowa City history: Lasansky. His father, Mauricio Lasansky, 97, came to The University of Iowa from Stanley William Hayter’s Atelier 17, the “New York School” to be exact, where he helped develop the techniques that would define printmaking in the twentieth century. He founded the UI print workshop in the 1940s and eventually became, in so many words, one of the most famous printmakers in the world.

Many men have crumbled under less paternal baggage, but Tomás is the youngest of six Lasanskys who grew up in Iowa City under their parents’ tutelage—mother Emilia also came from a prominent family of Spanish artists—and went on to build distinctive careers of their own. The oldest, William, became a highly regarded sculptor, Rocío a writer (see: Nina Barragan), Leo a printmaker and instructor and Jimena a professional dancer. The second youngest, Phil, chose to pursue the business end: He manages the Lasansky Corporation from its headquarters—the gallery at 216 East Washington.

Mauricio Lasansky won five Guggenheims in his life, which is more than any scholar, in any discipline. This underscores an emphasis on research and pedagogy that remains visible at the Lasansky Studio & Gallery on South Clinton, which Tomás runs with his wife and collaborator, artist Charlie Emmert Lasansky.

“There are no secrets here,” says Tomás of their space, abuzz with family, friends and artists-in-residence from sun up to sun down.

The Lasansky tradition is not one of creating great art by being bull-headed and self-centered. That’s not to say there is no stubbornness at all to the process, but Tomás, like his father, couples his passion for invention with a knack for strengthening the creative confidence of those around him. Each maintains a studious relationship with their materials and each spends a ton of time in a collective, workshop environment.

Tomás approaches the canvas lovingly, creating portraits that summon the dignity of his subjects. UI Printmaking Associate Professor Anita Jung, who must have seen more than her fair share of corny art romanticizing Native Americans when she was a student at Arizona State, says she is struck by the way Tomás forces you to consider subjects like Geronimo and Crazy Horse—figures that are practically (maybe literally) brands in the year 2011. She credits Tomás for a unique ability to bring historical icons into the present, observing that he does this both symbolically, by pairing his subjects with modern accoutrement and through his materials, using colors and textures that speak to a contemporary aesthetic. He presents his heroes in full regalia, facing forward, looking you in the eye. She says his visual language “reminds us of the way our history stays with us.”

Icons and Muses chronicles the evolution of Tomás Lasansky’s career in terms of subject matter and, especially, he and Charlie’s search for the new frontier of texture. It is a reminder that, aside from the UI print department, a parallel studio environment was created at the same time—with most of the same equipment and, also, under the Lasansky’s care.

No doubt the spirit of invention (and, perhaps, love for wild-haired, classical beauties?) that characterized Atelier 17 was also in the air of the Lasansky family’s basement studio, on South Summit Street, where a young Tomás learned from his siblings and created his first works.

He gestures around his current space, “Take a look! You can’t get anything done here after 8 a.m., there’s just too many people around.” By rising at 3 a.m. each day, Lasansky avoids the chaos of the post-8 a.m. collective. 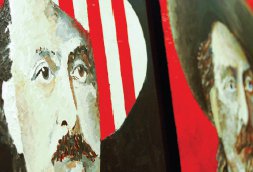 Tomás and Charlie’s studio attracts artists from far and wide, though there’s only space for a few of them at a time. They come to find new ways to bring ink to paper, or, in their words, “to work.” His nephew, Diego, 16, glues the corner of a frame for one of his prints (he’ll have four in Lasansky’s Spring Show).

Artist Lucas Underwood hangs around the kitchen, about to enjoy some omelets made by fellow artist-in-residence Adam Rake. Underwood tries to explain to me that he is experimenting with photosensitive acetate—he’s emulsifying black and white images onto copper plates that are to be acid-etched, inked and rolled through a press. The explanation wears me out, but it can only be a fraction as exhausting as the process itself.

Perhaps it is Hayter’s mandate—that artists leaving Atelier 17 set up workshops of their own, teach the techniques they’ve learned and continue to develop new ones—that drives Tomás to rise before the sun each day.

I asked him what it is that gets him out of bed so early—we’re all haunted by something, right? 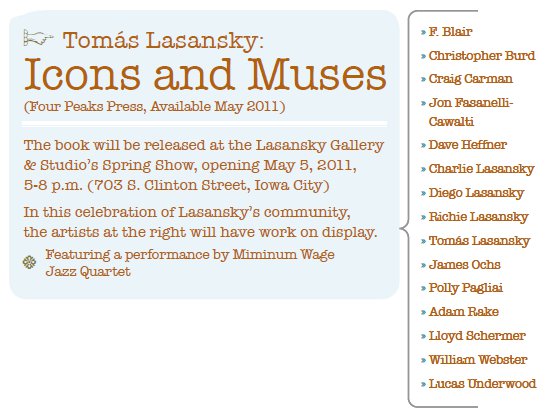