As I sit down to talk to Mary Blount, executive director of the Iowa Humane Alliance, a gray cat slinks its way across her lap and nuzzles against her shoulder. Blount’s reaction to the animal is automatic as she slides her hand down its back and uncrosses her legs so it can more easily traverse her lap. Watching the interaction between the two, I can’t help but think that much of Blount’s life’s work and passions can be summed up by the existence of this cat.

As Blount continues to stroke the cat, which is oblivious to the symbolic nature of its presence, she explains that on any given day there are approximately 20,000 to 30,000 stray cats just like it living on the streets of Cedar Rapids. This number has always been high, Blount says, but it really ballooned after the flood of 2008. There are stray dogs as well, but they are far outnumbered by the feral cat population, due to the fact that cats reproduce more quickly (females can start having kittens when they are as young as four or five months old), roam more freely than dogs, are better able to survive on their own and attract less attention from people because of their ability to hide.

In the 1970s, before spaying and neutering was a consideration, 17 million cats were euthanized each year in the United States in order to deal with overpopulation. Now that number is between three to four million, but it could be even further reduced if pet owners ensured that their animals did not produce offspring, Blount says.

Blount has worked for Iowa animal organizations and shelters for most of her life, and these positions have given her the rare opportunity to understand the severity of the dog and cat overpopulation problem, while also inspiring her to take action to change the situation.

“There is an endless flow of animals coming in and out of shelters, and while shelters do good work to care for the animals and find them homes, I realized that the work I was doing there, while rewarding, wasn’t solving the problem as a whole,” Blount said.

In order to better address the overpopulation problem, Blount founded the Iowa Humane Alliance Regional Spay Neuter Clinic that just opened on January 14th. It is the first high volume, affordable and quality spay and neuter clinic in the state of Iowa. The clinic is an offshoot of the Iowa Humane Alliance, which was founded in 2008 by three committed animal welfare advocates who identified the pressing need for effective spay and neuter programs.

The mission of the IHA Regional Spay Neuter Clinic is to provide access to affordable spay and neuter options in order to prevent the litters of unwanted kittens and puppies that end up in municipal and private shelters every year. Despite the tireless efforts of municipal shelters, humane societies, rescue groups and volunteers, euthanasia continues to be the principal means for controlling pet overpopulation. Spaying or neutering one animal can prevent the birth of the 40 to 50 offspring that animal may reproduce in its lifetime.

“What we’ll be doing is taking preventative measures instead of trying to fix the problem after the fact,” said Kathleen Schoon, the Director of Development for the IHA.

This local clinic is part of a mentorship program provided by the national Humane Alliance based in Asheville, North Carolina. This national organization has mentored the opening of over 100 clinics around the country that have followed the same model as the one in Iowa. Additionally, the clinic has received the financial support of Pet Smart Charities and the Pet Co. Foundation in order to complete renovations to its facility and pay for equipment and medical supplies.
Once fully operational, the Cedar Rapids-based clinic will perform 8,000 to 10,000 surgeries every year. The clinic will partner with rural shelters and humane organizations within a 100 mile radius and provide a transport service to bring animals to the clinic to be spayed or neutered, thereby providing affordable services to outlying areas that may lack local these options. 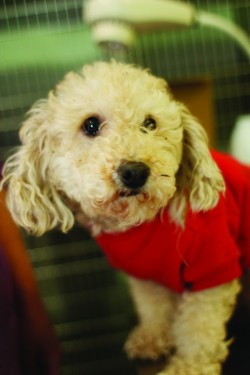 The clinic will also work with individuals who need to neuter and spay their cats. “People who can afford to have their pets spayed and neutered do it,” Blount says. “But thirty percent of animals still aren’t spayed or neutered because of the cost. For many of our clients it isn’t a lack of care but a lack of resources, and we want to try to help them solve their problem.”

The clinic will also work with more informal shelters that need support and assistance. Blount and Schoon recently visited the home of a widow who had over 70 cats living on her property. She began by caring for one or two strays, and before she knew it her barn and home were nearly overrun by felines. While she wanted to care for them, she was unable to do so due to a lack of resources. Assisting with this situation is one example of the kind of services the clinic will provide.

Although the clinic facility has been the primary focus of the organization, the IHA Regional Spay Neuter Clinic is also putting a special emphasis on working to overcome personal, philosophical and methodological differences among animal welfare organizations and individuals.

“This is a very opinionated line of work because of differing opinions of how to care for animals, the division of kill versus no kill shelters and other things,” Schoon said. “This results in a lot of duplication of services. We are hoping to bring everyone together by seeking ways to recognize common values, pool our resources and coordinate our efforts to accomplish the common goal of eliminating animal abuse and homelessness.”

The clinic is located at 6540 6th St. SW in Cedar Rapids. For more information, visit iowahumanealliance.org or spay-iowa.org.

Jill Bodach is a graduate of the Iowa Writers’ Workshop. She is an adjunct professor of English at Kirkwood Community College.