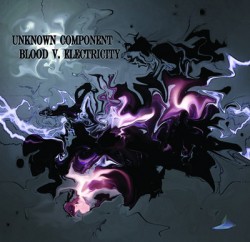 Keith Lynch, the man behind Unknown Component, may cringe when I draw an easy comparison between his latest release and the work of Radiohead, but I make the comparison lovingly and without claims of derivativeness. Unknown Component has all the elements in place for a great alternative rock album: crisp production, tried and true instrumentation, and sincerity.

Unknown Component’s latest album Blood v. Electricity begins with squelchy synths and melancholy piano arpeggios before brooding guitar, minimalistic drum machine, and orchestral synth patches take over. Lynch’s arrangement of the component parts is tight and well balanced, but seems to build energy towards a release that never quite occurs. The restraint shown in the title track seems to set the tone for the rest of the album as well.

High points of the album include the track “Pendulum” which combines crunchy guitar, live drumming, sparkling synths and a chorus that reaches a satisfying crescendo. In its best moments the song reminds me not of Radiohead but of Grandaddy, a band that’s turn of the millennium albums likewise combined traditional rock instrumentation, synths and occasionally heartbreaking sincerity. The next track, “Sensory Deprivation” provides one of the most interesting dynamic contrasts of the album and displays Lynch’s success as a lyricist and a talented (albeit sometimes circumscribe) vocalist.

Lynch seems to have found his groove in the melancholy and bittersweet sounds his guitar and voice have to offer him, and despite his success with those emotions, I found myself wishing for some tracks that hollered with joy or even rage. I don’t hear enough blood in Blood v. Electricity, and for me the album appears to be cast consistently in shades cobalt and plum instead.

Lucas Williams was born and raised in Iowa City but now works as an environmentalist in Chicago. He likes bicycling and beer.